The 5-2 Browns are preparing to face the 3-3 Las Vegas Raiders in Cleveland on Sunday at First Energy Stadium. This is a game The Dawgs really should handily win against a lesser team, but there are no guarantees in the NFL.

Let me preface this by saying that I am a big QB Baker Mayfield fan and this article is not to doubt him as the franchise quarterback for the Browns.

Baker had an amazing previous performance, despite a shaky start, on the road against the Cincinnati Bengals (5td, 22/28, 297 total passing yards). It led to a Browns 37-34 win. Baker even broke the franchise record for most completions in a row (previously held by QB Kelly Holcomb at 16). He won AFC Offensive Player of the Week, as well!

What everyone must remember is that the Bengals prepared to face a Browns team that was going to have wide receiver Odell Beckham Jr. on the field the entire game. His impact just by playing is immense even if the statistics aren’t there. Thus, when he tore his ACL just before the end of the first quarter, it had the Bengals scrambling to change everything on their side. 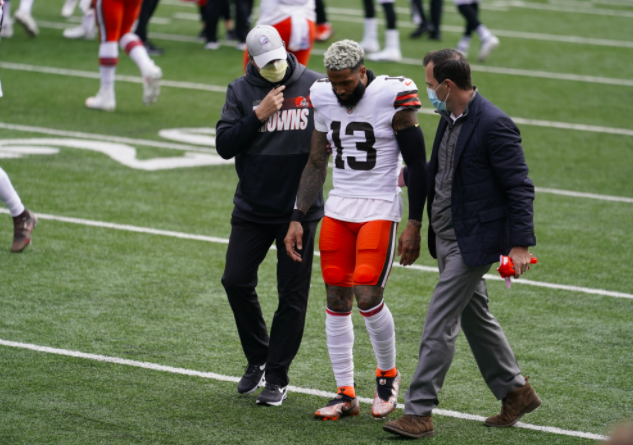 This whole week, I’ve heard from various fans that Mayfield may be better without OBJ on the field. While I do think there is some truth to that because he has less pressure on him to feed the ball to such a strong character, personality etc., it also changes so much.

Mayfield shined the rest of the game and the Browns were able to win without OBJ. But what happens when an opponent has a week to prepare for this Cleveland offense that doesn’t have Beckham Jr. on the field? My fear is that when a team actually has time to get geared up for THESE Browns, the defense will be much better against our quarterback and company.

Starting with this game against the Raiders, we’ll truly get to see if Baker does consistently perform better with “system” receivers and not stars. Guys that aren’t going to lead the league in anything but fit in with the right QB out there.

Baker and Odell may just not work together and what fans have preached all week could be true. However, after teams get to make those aforementioned adjustments for this new system, Baker will have to work against defenses ready for who and what will be thrown.

Let’s see if he’s up for the challenge for the remainder of the season.

Finally, best wishes to OBJ for a speedy and smooth recovery. No one *wants* to see anyone sustain an injury, especially one so severe, even if it’s been said the team is better without him. Hopefully, he’ll be back on the field in 2021 as the same amazing receiver we’ve come to know and love.