In the last seven days, the Browns finished their 6-10 season, fired head coach Freddie Kitchens and general manager John Dorsey and gave permission to the assistant coaches to seek other employment. This has led to a storm of opinions from Browns fans on who should coach the team in 2020 and hopefully beyond.

Among the favorites include former Packers head coach Mike McCarthy, current Patriots offensive coordinator Josh McDaniels, former Ohio St. and Florida head coach Urban Meyer, current Vikings offensive coordinator Kevin Stefanski, alongside many others. All of the people who are being interviewed are great coaches and many would probably do a great job in Cleveland. As you have seen by the title of the article, there is one man who should not become the head coach, Josh McDaniels.

McDaniels is either the favorite or the second-favorite of many Browns fans and is being interviewed on January 10 by the Browns, as well as the Panthers and Giants.

Now, let’s start with the positives. McDaniels is a six-time Super Bowl champion, all of which happened in New England. McDaniels is one of two of the Browns prospects with NFL head coaching experience and has kept New England as a top-seven scoring team under his watch since 2012. While New England has been a nearly two-decade-long dynasty, the Patriots did not win a playoff game in the two seasons that McDaniels was the head coach in Denver. This is a fantastic resume, but some holes can be poked into it.

All six of the Super Bowls happened under the greatest head coach ever in Bill Belichick and the greatest quarterback ever, Tom Brady. This doesn’t belittle the accomplishment of six Super Bowls, it is just fair to say that there were other influential players in these Super Bowls. As I said, McDaniels has head coaching experience, he spent 28 games as the head coach of the Denver Broncos. He had an 11-17 (.393) record in those games and was let go after 12 games and a 3-9 start to the 2010 season.

After the 2017 season, McDaniels was confirmed to have joined the Indianapolis Colts to be their head coach. The Colts owner Chris Ballard said that he had no indication of McDaniels wavering. The Colts social media tweeted that McDaniels was their new head coach. Then, all of sudden, after a meeting with Patriots owner Robert Kraft and coach Bill Belichick, McDaniels changed his mind and returned to New England as an offensive coordinator. This raises questions about what happened in Indianapolis; what made him change his mind? 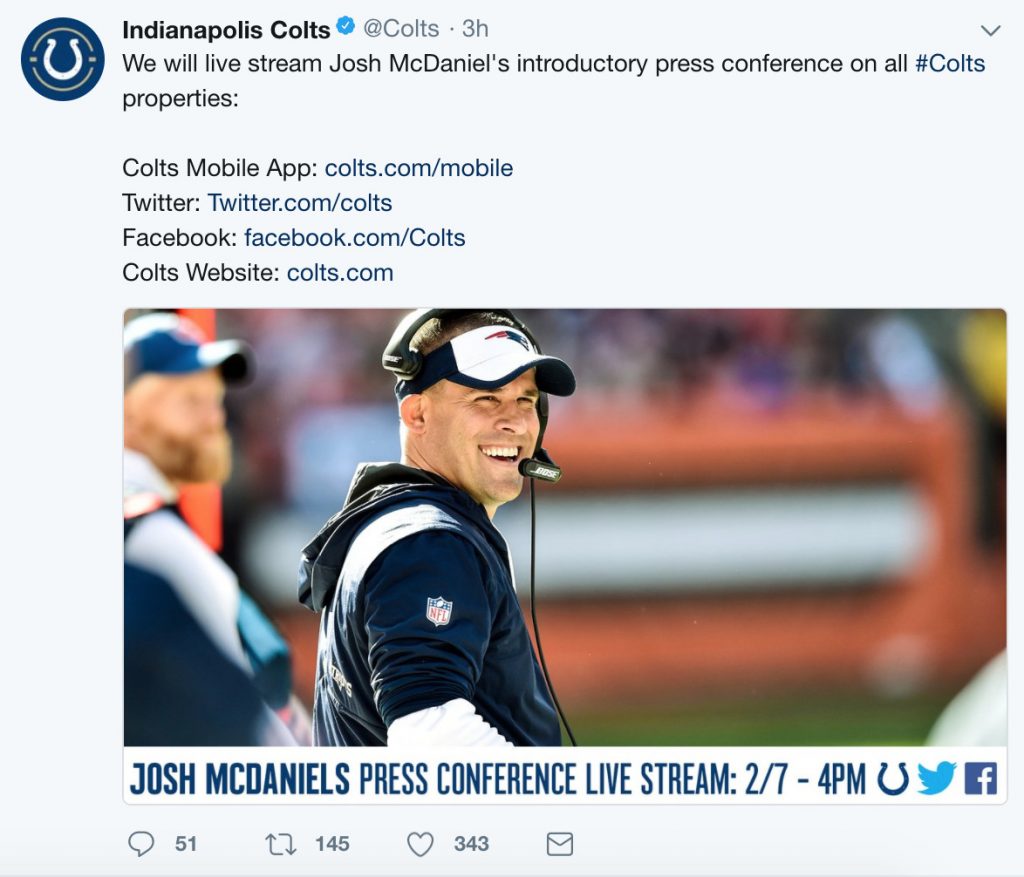 There also is the fact that of the four major major scandals in the NFL since 2000 (Spygate by the Patriots, Bountygate, Spygate by the Broncos and Deflategate) McDaniels has been in the organization that committed the acts for all but Bountygate. I’m not saying that McDaniels was deflating footballs, but he almost certainly knew about the Spygate in New England and part of the reason for his firing in Denver was the tapes, alongside his poor performance.

McDaniels MIGHT be the next genius head coach. His offensive touch MIGHT be enough to elevate Baker Mayfield and form a connection between Mayfield and star receiver Odell Beckham Jr. He MIGHT be the man to bring the Lombardi trophy to Cleveland for the first time. Or he could waste another year of Mayfield’s, Nick Chubb’s and Myles Garrett’s rookie deals.

McDaniels is probably the head coaching prospect with the highest ceiling but also the lowest floor.