With the Cavaliers having the second-worst record in the league, they have a 14% chance at the number one pick and cannot fall outside the top-five. Below is a list of the top-five prospects the Cavs should draft: 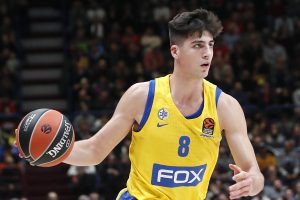 Right now Avdija has the upside as high as Luka Doncic, and a floor like Darco Milicic. With top overseas prospects being very inconsistent in the past, you can’t really tell what you’ll get out of Deni. Interestingly, Koby Altman recently attended some of his games, where he played very well. Recently, for Maccabi Tel Aviv, his role with the team has been diminished somewhat, leading to a drop in stats, but that hasn’t lowered teams’ interest in the Israeli star. Should the Cavaliers draft him, he would join a team that will likely roster Darius Garland, Collin Sexton, Kevin Love, Kevin Porter Jr and Andre Drummond as notable names. This would likely leave Kevin Porter Jr. as the 6th man who would provide scoring off the bench.

Avdija would make a great point forward, being able to guard and play the four but able to take on the ball-handling responsibilities. Like every overseas prospect, his toughness will be questioned. Deni has the ability to stretch the floor (which would dramatically help Drummond’s post-game) but he also has a talent at getting to the basket to add some reliable scoring for the Cavaliers.

1 thought on “Who Should the Cavaliers Draft?”