Week 5 and the Indianapolis Colts are a thing in the past and even though the Browns are looking great at 4-1, it’s time to get ready for the biggest game in a very long time. The Pittsburgh Steelers are coming off a Week 5 victory as well. They’re suiting up to host an AFC North rival at Heinz Field this Sunday at 1 p.m.

The Pittsburgh Steelers just had an exciting 38-29 win vs. the Philadelphia Eagles last Sunday, which moved them to 4-0. QB Ben Roethlisberger led the Pittsburgh offense by completing 27 of 34 passes, threw for 239 yards and three touchdown passes, all to rookie wideout Chase Claypool to top off his seven reception, 110 receiving-yard breakout performance. Although the Steelers defense has been one of the best in the NFL; they had their faults against the Eagles offense. QB Carson Wentz had his best performance so far this season; he was 20/35, threw for a season-high 258 yards, and two TDs. However, the Steelers were able to intercept Wentz twice in the game, which was crucial to their victory. The Steelers gave up a long 74-yard run early in the game, but tightened it up quickly, only allowing the Eagles to rush for a total of 94 yards on 16 carries.

The Browns have moved on to 4-1 for the first time since 1994 after an impressive 32-23 win against the Indianapolis Colts. A concern heading into the game was if the Browns could continue their offensive attack against the top scoring defense in the league and for the fourth-straight game, Cleveland was able to score over 30 points. QB Baker Mayfield was 21/37, threw for 247 yards and two touchdowns and even though he threw two interceptions, the Browns defense came through and stopped the Colts on those two turnovers, forcing them to settle for field goals on both occasions. Furthermore, the Browns offense gained a total of 124 yards rushing, including a crucial 32-yard run from RB D’Ernest Johnson which sealed the game for Cleveland. On defense, the Browns did an exceptional job, picking off QB Phillip Rivers twice, even a 47-yard pick-six from S Ronnie Harrison. Rivers was 21/33 and threw for 243 yards, but had no TDs and finished with a dreadful 42.4 QBR rating. The Colts were only able to scrape 68 yards total rushing and even though they had a kickoff return TD directly after Harrison’s pick-six, it was not enough to ignite Indianapolis to make a comeback.

History has not been kind to our beloved Cleveland Browns when they travel to Pittsburgh. The Browns have not won a game in Pittsburgh since 2003, the season prior to the Steelers drafting Big Ben. The Browns-Steelers rivalry is the oldest rivalry in the AFC, dating back to 1950, but with their 136 meetings Steelers own the Browns with a record of 76-59-1, and since the Browns return in 1999, the Browns have only beaten the Steelers six times and tied once in their past 41 meetings. Something to also take note of is that both teams are sitting at great records: Browns 4-1 and Steelers 4-0 (one game behind because their game vs. Tennessee was postponed due to Covid). This game is huge for the first time in a long time that holds so much importance for the teams’ AFC North standings and playoff hopes.

The elephant in the room is this is DE Myles Garrett’s first time playing the Steelers since the Mason Rudolph incident when he struck Rudolph with his own helmet last season on the last play of the Thursday night game, which ultimately led to his season-long suspension (originally an indefinite suspension, and was lifted in the offseason). One can only imagine what the emotions are going to be like in Heinz Field when Garrett takes the field. 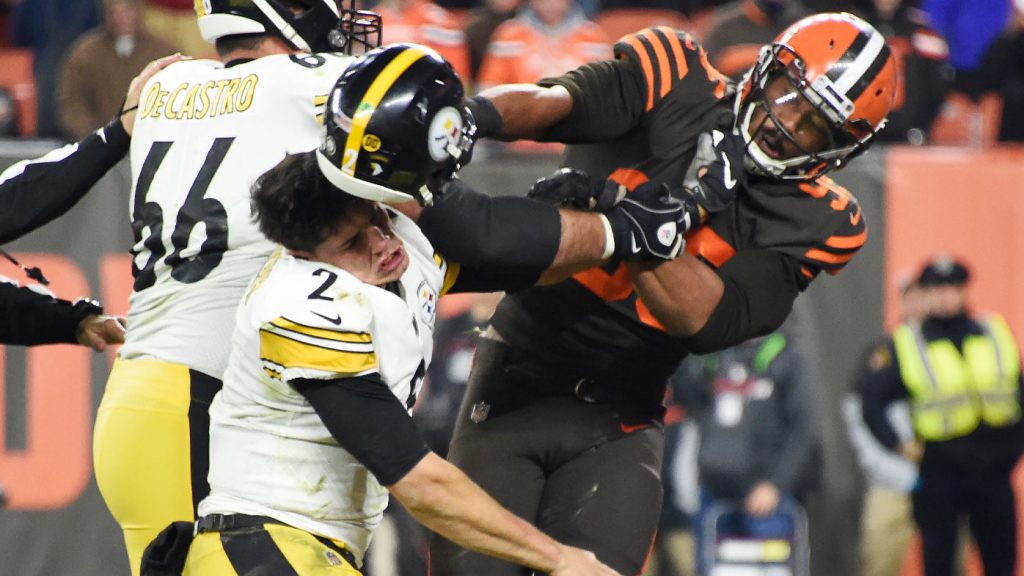 According to Pro Football Focus, Myles leads the NFL in pressures with 31 and has the highest pass rusher grade with a 91.0 rating. The Steelers defensive line led by DE TJ Watt should not be unmentioned, however; Pittsburgh’s D-Line leads the league in pressure rate with 50%, but the Browns offensive line has the league’s 3rd best pass-blocking efficiency rating at 91.5, so that should be an interesting matchup. Something else that will be interesting to see is how the Steelers defense, one of the top-ranked run defenses in the league, will look against the Browns explosive running attack. The Browns also face a challenge with their lackluster secondary and how they can stop the Roethlisberger-Schuster-Claypool trio. With that being said, the Steelers secondary has been average and they also face a challenge dealing with the Mayfield-Beckham-Landry connection.

The Cleveland Browns and Pittsburgh Steelers are two teams with strong history against each other. While this legendary matchup has not panned out for the Browns for years now, they are looking to write a new chapter in the history books, and start a new era for the Browns-Steelers rivalry. Tune in this Sunday at 1 p.m. to watch this historic game!