It’s tough to move on from tough losses, but that’s what Cleveland has to do. The Browns are 9-4 and it’s a good place to be for the playoff hunt, but not good enough to confirm a spot. It’s a shorter week to prepare and the team needs a bounce-back win, but most importantly, keep the wheels turning and going full speed on the road towards the playoffs. The Browns travel to MetLife Stadium to face the 2nd place team of the NFC East, the New York Giants.

It’s hard to believe in Week 13, the Giants shocked Russell Wilson and Seattle Seahawks by beating them 17-12, but in the very next week, the New York Giants (5-8) laid an egg against the Arizona Cardinals (7-6) and lost 26-7. The game itself was overall a boring matchup, in which the Cardinals destroyed the above-average Giants defense having 159 rushing yards, 231 passing yards for a grand total of 390 yards. QB Daniel Jones went 11/21 and threw 127 yards before going out with an injury. Former Browns QB Colt McCoy came in and finished 2/3 with a whopping 18 passing yards.

The Browns’ Sunday night showdown vs. the Ravens was anything but boring. The Browns marched down the field on the first drive and RB Nick Chubb sealed the great first drive with an eight-yard TD run. The Ravens answered back with a drive of their own and sealed with QB Lamar Jackson running it in from the six-yard-line. The ensuing Browns drive was promising, but the Ravens stopped them to force them to settle for a field goal. From 39 yards out K Cody Parkey whiffed the kick and went right of the goalposts. The Ravens were able to score two more TD’s in the second quarter and with another Chubb TD, the Ravens went into the half leading 21-14. The first drive of the second seemed like it spelled doom for the Browns as Jackson made the defense look silly on a 44-yard run that landed the Ravens in the red zone, which was capped with a TD on the next play by RB Gus Edwards. The Browns were down 28-14, which was not promising, but on the next drive the Browns drove down the field and RB Kareem Hunt punched it in, but Parkey missed the extra point and the game was 28-20. Things started going for the worse when Mayfield threw an INT that was returned to the one-yard-line and was punched in for a TD by RB J.K. Dobbins on the next play. Surprisingly, Baltimore K Justin Tucker’s extra point was blocked and the game was 34-20 late into the 3rd quarter.

Many Browns fans were hopeless that they could mount a comeback and the game was over at that point and how wrong were they. Behind the arm of Baker, the Browns went down the field and on a 4th & four play on the 21-yard-line, Baker scrambled and found a wide-open WR Rashad “Hollywood” Higgins. The Browns went for the two-point conversion and succeeded off a tipped pass intended for Hunt, but the ball found itself in the arms of WR Donovan Peoples-Jones. It was 34-28 early in the 4th and news broke that Lamar went into the locker room for cramps (many speculate it could have been for different reasons) and backup QB Trace McSorley went in for the Ravens. After their drive failed because of a dropped 3rd & six pass to WR Marquise Brown, the Browns answered with a TD drive topped with a TD run by Mayfield. The Browns were suddenly in the lead, 35-34. The Browns defense held the Ravens to their own 41-yard-line and stopped McSorley on a 3rd & 5 play and the QB went down with an injury. In dramatic fashion, Jackson ran out of the tunnel and was back in the game. On the next play, on a 4th & five, Jackson threw the ball to a wide-open Marquise Brown, who ran it all the way to the end-zone. And after a successful two-point conversion, the Ravens were now back on top, 42-35. With less than two minutes to go, the Browns had to march down and score quickly and they did just that. RB Kareem Hunt received a 22-yard pass from Mayfield and stumbled his way for a TD. The game was tied 42-42 with 1:05 left in the 4th, but that was too much time left for the Ravens to answer. Baltimore marched down to the Browns 45-yard-line and with two seconds left, Tucker was clutch and proved why he’s the best kicker in the NFL. The kick went right down the middle of the goalposts from 55 yards out. The Ravens were up 45-42 and the Browns tried to lateral their way for a miracle TD but were pushed all the way back to a safety and the Browns lost in heartbreaking fashion, 47-42. In this former Heisman QB battle, Baker went 28/47, threw for 343 yards, two TD’s, ran for a score and had one INT. Jackson went 11/17, threw for 163 yards plus a TD, ran for 124 yards and a TD as well. 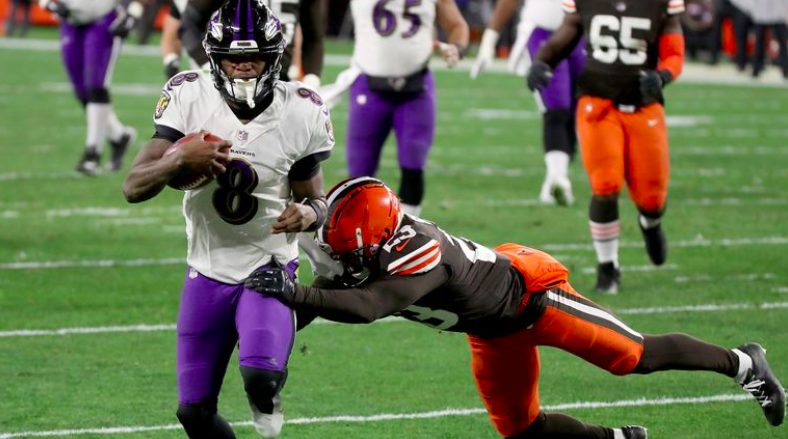 The Browns need to use this upcoming Giants game as a “get-right” game, and not take the Giants lightly whatsoever. The Giants offense is very stagnant without star RB Saquon Barkley and has only scored 30+ points once this season (Week 5: 37-34 loss vs. Cowboys). Also, the Giants offense is 2nd-worst in the league (300.1 ypg/18.1 ppg). QB Daniel Jones was supposed to be the next great QB after Eli Manning’s departure, but he has not lived up to expectations. Unfortunately for the Giants, yet fortunate for the Browns, Jones will not play this week due to injury and former Browns QB Colt McCoy will sub in. Also, notably, OC Jason Garrett will not be calling the plays due to testing positive for COVID and in an incredible coincidence, former Browns HC and current Giants tight ends coach Freddie Kitchens will fill in. The biggest narrative that has been formed late this week is this is a Freddie Kitchens’ revenge game. All signs are pointing towards a huge break for the Cleveland Browns defense after being demolished by Lamar Jackson and the Ravens. And with pro-bowl CB Denzel Ward back for the Browns, the defense can have some pep in their step.

The Browns are going to be without G Wyatt Teller, a huge piece to the puzzle for the smash-mouth running game and an integral part to the protection of Baker Mayfield. PFF has Teller graded at 93.8 and has only allowed three sacks all season. Something that can worry the Browns game plan is the defensive line because according to the ESPN stats, they are sixth in the league in rushing defense, only allowing an average of 101.5 yards per game. This Giants defense has kept them in the NFC playoff hunt and although their offense is second-worst in the NFL, their defense is ranked 10th, as they allow only 22.4 ppg and 342.9 ypg. A big break for the Browns is that Giants CB James Bradbury is out with COVID, who is a big part of the success of the Giants D. Something also notable for this revenge game narrative, former Browns safety Jabrill Peppers, who was involved in the trade for WR Odell Beckham (which would’ve been great seeing Odell play his former team that would’ve added to the revenge game narrative) is playing against his former team for the first time.

The Browns need to win this game, nothing more to it. The Browns’ chances of getting to the playoffs at 9-4 are 86.5% and if they blow this Sunday night game to the Giants that percentage drops to 68%. Let’s think positive. The Browns are on primetime television for the second game in a row in less than a week, and the whole nation gets to see once again how for real the Browns are. They are going against someone who is calling plays for the Giants and it’s his first time doing so since being fired last season. Time to flip the switch and go all out to get this victory with conviction. Tune in this Sunday night at 8:20 to watch the Browns take on the Giants!