The Cleveland Browns are 8-3. The Browns are now guaranteed to finish with at least a .500 record, which would be the first time that the team has done so since the 2007 season. Now it’s on to the next week and to keep themselves in the AFC playoff picture, the Browns need to show up and show out on their next game. They face another 8-3 team, the Tennessee Titans, which will be a tough matchup for Cleveland.

The Titans are coming off a good win versus the Indianapolis Colts, which resulted in a 45-26 beat-down. The Colts, who have one of the top defenses in the league, were without their star DT DeForest Buckner (put on COVID/reserve list prior to game), and it certainly showed how valuable he is to the defense, as Tennessee RB Derrick Henry was able to run all over them. In the first drive, the Titans, led by QB Ryan Tannehill, were able to march down the field and it ended with a short screen pass to Henry, who ran it 11 yards for the touchdown. Although the Colts answered with an 11-yard TD strike from QB Phillip Rivers to WR Trey Burton, the Titans gut-punched the Colts defense on the next drive with a 69-yard TD from Tannehill to WR AJ Brown. The Colts then answered again by taking it down the field and capped it off with a QB sneak by backup QB Jacoby Brissett. Then, the game got out of hand for the Colts. Derrick Henry went off and scored two more TD’s in the second quarter and Tannehill also ran in a TD as well and the score at half was 35-14, Titans on top.

The Colts dug themselves a hole they could not crawl out of and especially was dug deeper after Phillip Rivers threw an interception and a kick return TD by AJ Brown in the 4th quarter. The final score was 45-26 and Derrick Henry finished with 178 yards and three TD’s while Tannehill was 13/22, had 221 yards along with one passing TD.

The Browns were also victorious in their last game against the Jacksonville Jaguars, but it ended up being a closer game than anticipated. With Cleveland’s pro bowlers DE Myles Garrett & CB Denzel Ward out for the defense and S Ronnie Harrison leaving early with a shoulder injury, the defense was not at full strength against the QB Mike Glennon-led Jags offense.

Jacksonville struck first with a field goal, but Cleveland answered with a connection in the red zone from QB Baker Mayfield to WR Jarvis Landry (his first TD catch of the season). Jacksonville was good on another field goal, but the Browns marched down the field to the red zone. Unfortunately, an overthrow to a wide-open WR Rashad Higgins forced the Browns to settle for a field goal. The Jags scored a TD on the next ensuing drive and the Browns once again answered with a TD, this time to TE Austin Hooper (also first TD of the season). 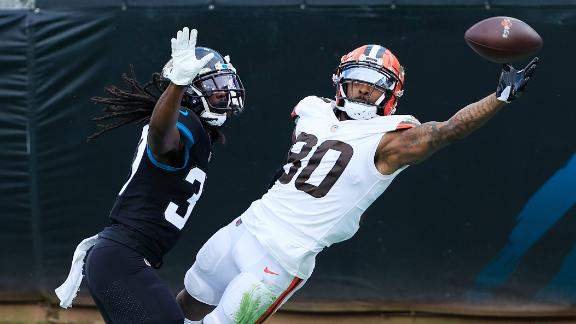 Jacksonville attempted a 54-yard FG as the half expired, but missed wide left and the Brown went into halftime leading, 17-13. The Jags struck first once again in the second half with a TD from Glennon to TE Tyler Eifert, failed to convert the two-point conversion, but was in the lead, 19-17. Cleveland’s K Cody Parker on the next drive scored a field goal to put the Browns ahead 20-19 and the defense held the Jags offense and forced them to punt. On the next drive, RB Nick Chubb scored and put the Browns up, 27-19. Late in the 4th and still ahead, the Browns had a turnover on downs after an unsuccessful run attempt on 4th & 1 by RB Kareem Hunt. With a little over two minutes to go in the 4th and the Jags four yards away from the end zone, RB James Robinson ran in and scored a TD with the help of his offensive line pushing him in and the score was suddenly 27-25, Browns leading. Jacksonville went for another two-point conversion, but luckily, the Browns secondary was able to keep a lockdown coverage and S Andrew Sendejo intercepted the pass out of bounds of the end zone. The Browns held on to win, 27-25. QB Baker Mayfield finished 19/29, had 258 passing yards and two TD’s. Nick Chubb had 144 yards off of 19 carries and one TD. Jarvis Landry had a big day with eight receptions, 143 yards and a TD. Mike Glennon, on his first start since 2017, went 20/35, had 235 passing yards and two TDs. Rookie RB James Robinson had a good performance with 128 yards off 22 carries and one TD.

With both the Browns and Titans being 8-3 and fighting for a good playoff spot in the AFC, this game is tremendously important to these franchises. Obviously, Derrick Henry is a monstrous running back and hard to stop and there has been a concern all season about the Browns being able to stop offenses around the league. But, there’s hope knowing that DE Myles Garrett is back. According to PFF, Garrett has an 89.9 pass-rush grade, which is 4th among all DE’s in the league. The Titans offensive line is banged up, so Myles being back can cause a disruptive pass rush. The secondary is worrisome, especially playing against one the league’s best QB-WR duos, Ryan Tannehill and AJ Brown. The Titans pass rush is almost non-existent and with the Browns having the 1st-ranked pass-block O-Line, it will depend on passing the ball down the field and the Browns’ explosive run game (Browns O-Line ranks 2nd in run blocking).

Browns fans everywhere are looking forward to this exciting AFC showdown. This is the most important game in recent memory, especially since the Browns have not knocked on the door of the postseason this late in the season in years. Be ready to watch your Cleveland Browns travel to Nashville’s Nissan Stadium and take on the Tennessee Titans this Sunday @ 1 pm!