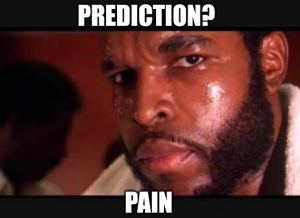 If you know me, you know how much I love the Rocky Movies and what a perfect time for a reference. Everyone loves to predict the records for the NFL Season and its various teams. USA Today gave the Browns a 6-11 record overall – last in the AFC North.

First of all, it’s pretty much impossible to accurately predict the Browns’ record until the QB Deshaun Watson suspension decision ever is announced. This 6-11 record prediction likely assumes that Watson is going to get a sizeable suspension that could be for the entire season.

The team will have to rely on backups Jacoby Brissett and the newly-signed Josh Rosen. Thus, being the reason for a terrible final record of 6-11.

Say the Watson announcement was already made and it was for the entire year or at least 10-12 games, then this type of prediction would make *some* sense. Even so, the Browns have the talent on the roster to contend and it’s just a matter of finding who will be under center for the season. Obviously, that’s not to say it isn’t important. It’s just not the entire end-all-be-all.

This was the prediction made for each of the 32 teams and it did not make Browns fans happy, that’s for sure:

I understand that it’s not the fault of the USA Today publication that it seems like it’s taking forever for a Watson decision to be made by the NFL. Even so, doesn’t 6-11 seem a bit harsh regardless of who’s the quarterback for the Browns this upcoming season? We mentioned the talent that this entire roster is filled with at each position.

Hopefully, if Watson is able to play, he will prove those that doubt him wrong and make predictions like this silly. If he does get suspended, the Browns better pray these backups show up and help the team win regardless. Maybe making the team even better than 6-11 sans-Watson.

Lastly, I believe that it is unfair to the Browns, the front office and Deshaun himself for such a delay in a decision being made on Watson. Preseason is fast-approaching and yet there still hasn’t been an announcement. That is absolutely crazy. 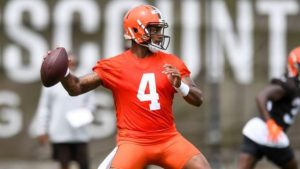 In a few months, hopefully, Browns fans can look back and scoff at the 6-11 prediction when this team makes the playoffs!