A couple days ago, I wrote an article about overlooked players at each positional group on offense to watch during training camp that could help fill out the Cleveland Browns roster found here. This time around, I’ll be profiling an under the radar player to keep an eye on for each positional group on the defensive side of the ball. Some of these players are young guys that could improve organizational depth and develop and others are undervalued veterans that I believe will play significant roles on the team. 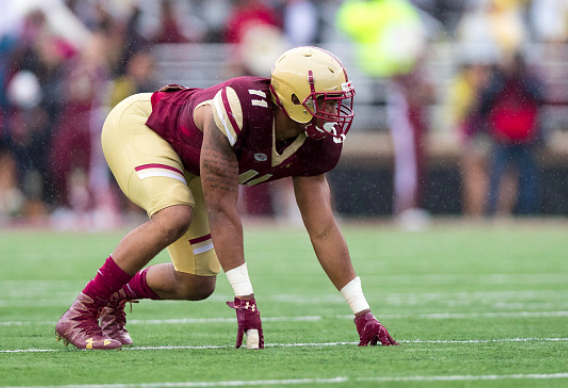 The Cleveland Browns aren’t all that different this year as they’re bringing back their defensive superstar, Myles Garrett, along with a standout gem from last year’s draft, Genard Avery, and depth guys Anthony Zettel, Chris Smith and Chad Thomas. Sure, the team traded away starter Emmanuel Ogbah to the Chiefs, but the Browns upgraded him with one of the NFL’s premier edge rushers, Olivier Vernon, in one of their two offseason blockbuster deals with the New York Giants. With one of the best pass rushing duos in the NFL, there are only rotational spots up for grabs for likely three, maybe four more players since Avery is a bit of a hybrid. There’s a chance that a newcomer could push the veterans for one of the final spots, and I think that Wyatt Ray is the guy to watch for.

Wyatt Ray is an undesired free agent out of Boston College. He has prototypical size for an edge rusher standing at 6’3 and 257 pounds, and it was thought that he could be a day three selection during this year’s draft. However, Ray’s name was never called, which could end up being of great benefit to the Browns. He has plenty of potential with his long arms, strong hands, and great athleticism, but he still needs a lot of work on technique and his jumps are often quite slow despite being an explosive athlete. Ray only became a full-time starter last season because he was blocked behind 2018 first round pick Harold Landry and 2019 third round pick Zach Allen, which explains why he’s still quite raw. However, in that season, he was quite impressive as he started all 12 games finishing with nine sacks, 11.5 TFLs and 44 total tackles. Wyatt Ray is definitely raw and he might not quite be ready to push one of the vets out of a job quite yet, but the Browns should try to sneak him onto the practice squad to see if he can tap into his tremendous potential. 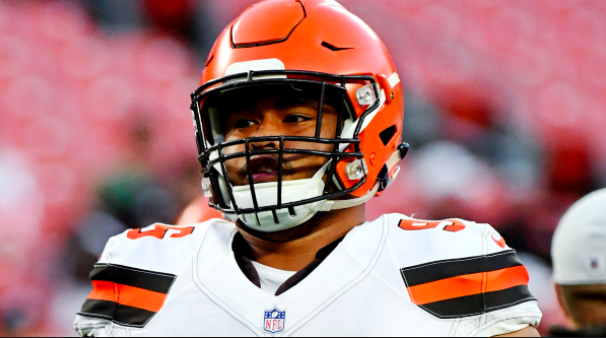 One of the Cleveland Browns’ weak spots in terms of depth is at the defensive tackle position. Their starters are outstanding with Larry Ogunjobi continually improving into one of the best DTs in the league, and they acquired former Pro Bowl DT Sheldon Richardson during free agency to pair with him. Dorsey tried to sign both of the most recent big name free agents at the position, Gerald McCoy and Mike Daniels, but the Browns could not come to a deal with either player, so they’re still searching for rotational production behind their two starters. Trevon Coley didn’t grade out all that well as a starter, but he’s a great depth player because it’s extremely rare to find a player so young and cheap with as much starting experience as him. That still leaves probably two more spots left, and it seems like one of them could go to Daniel Ekuale.

Daniel Ekuale is entering his second season out of Washington State. He’s a 6’3, 300 pound defensive lineman who spent last season on the Browns practice squad so some fans may remember him. He’s reportedly working with the second team along with Coley, so he’s in a good position to make the final 53 this season. Ekuale has earned a lot of praise throughout the offseason from the coaching staff, so there’s reason to be hopeful that they may have found a nice backup at the position. 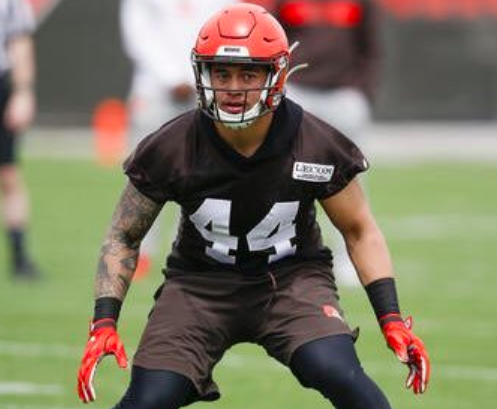 One of the Browns’ biggest areas in need of improvement was their linebacker corps. Joe Schobert was honestly the only one playing respectable football for the better part of the season, and the pro-bowler will return as the MIKE LB in the middle of the defense.

The uber-talented backer that seemingly used to take plays off, Jamie Collins, is gone, so Browns fans won’t have to see him take plays off anymore and get burnt for long runs. The forever underrated perennial team captain, Christian Kirksey, is back and fully recovered from his injury that cost him most of last season, so he should provide an immediate boost at the WILL LB position.

The Browns knew they were in need of some help, so they drafted Sione Takitaki out of BYU in the third round and Mack Wilson out of Alabama in the fifth round this year. The Browns also signed Adarius Taylor to a two-year contract in free agency who had 60 tackles last season for the Buccaneers and is currently working as the first-team SAM LB in camp. This group could certainly use some help, but I think the Browns did a nice job overhauling the linebacker room; they just need a couple guys to step up and perform. I think it’s possible that the two most notably underrated players to watch in this group are Christian Kirksey and Sione Takitaki even though Adarius Taylor will be serviceable and could surprise some people.

It doesn’t seem possible that Christian Kirksey, the Browns 2018 Walter Payton Man of the Year nominee, would still be under the radar, but I think he’s quietly been one of the best linebackers in football over the last couple seasons, excluding the games he missed due to injury last year. He earned every bit of his four-year extension worth $38 million with $20 million guaranteed, which he is in the second season of. He had 281 tackles between 2016 and 2017, which was good for second-best in the NFL during that time period, and he did that with a defensive line nowhere near as talented as this one.

However, there are notable media members that think Kirksey could be replaced as a starter and even cut as soon as next year, which I think would be a really bad decision. Barring an injury, Kirksey should be able to freely fly around the field and make all kinds of tackles and I believe he’ll end up near the top of the league in that stat while having a career year. Hopefully, Captain Kirk will finally get the recognition he deserves with a fantastic season this year.

Sione Takitaki was considered a pretty questionable pick in the third round by most media outlets to say the least. Many thought that the rookie out of BYU could’ve been drafted much later and it seemed like most people didn’t know much about the guy. However, it turns out that he’s a pretty interesting and extremely physical player. His physicality has even been Takitaki could be this year’s Genard Avery as the rookie similarly plays violently, and Takitaki also has experience at both edge rusher and off ball linebacker in college. The rookie was productive at both spots and that versatility could help him see more playtime just like it did with Avery. As of now, Takitaki is being used as a MIKE LB paired with fellow rookie and new best friend, Mack Wilson, as the WILL LB. It will be really exciting to see how the pair grows together, but it seems like Takitaki could have the early advantage for playtime because of his extremely physical play style along with his versatility. 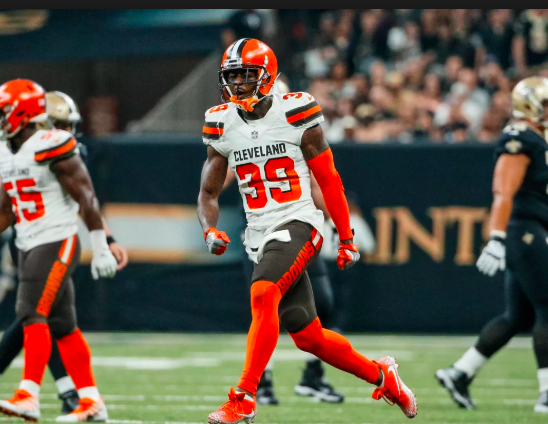 The Cleveland Browns shocked the world and drafted Denzel Ward with the fourth pick in 2018, but the homegrown talent had a phenomenal rookie season and immediately established himself as the number one corner and a franchise cornerstone for the foreseeable future. They lost EJ Gaines to free agency, but they are returning Terrance Mitchell and TJ Carrie who played major roles as well as depth corners Phillip Gaines and special teams standout Tavierre Thomas.

The Browns still felt the room needed help, so they made it a priority and traded up to draft a premier, first-round talent with the 46th pick in Greedy Williams out of LSU. Greedy is a phenomenal cover corner who will quickly earn playtime and create one of the best young cornerback duos in the NFL playing across from Denzel Ward. He’s already been standing out in camp my making a lot of plays and intercepting a few passes, so he’ll be really exciting to watch get better and better leading up to the season opener. However, the forgotten name among these players seems to be Terrance Mitchell who was outstanding in his first real shot at a starting gig last season when healthy.

Terrance Mitchell made a ton of plays early on in the season and he was a big part of the reason why the defense was creating so many turnovers as he had one INT, two FF, and one FR in just seven starts. Had a broken arm not derailed his season, it seems like the veteran would’ve had a huge breakout year. When he came back later on in the season, he provided a nice boost to the defense, but he wasn’t playing quite at the same level. If he can get back to where he was heading into last season or even better, the cornerback room could be absolutely loaded with two budding stars and two great veterans. 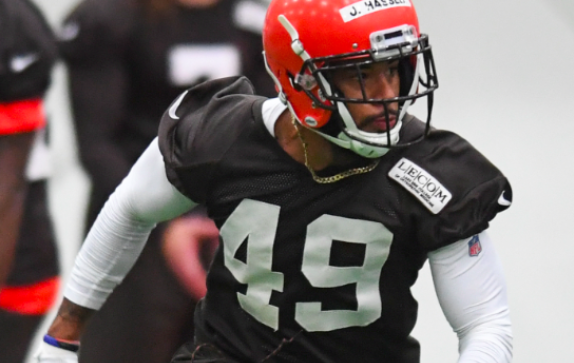 Damarious Randall returns for his second season in Cleveland as the lone certainty at the position. He’s coming off a great season, but he’s looking for a new counterpart as Jabrill Peppers was traded to the Giants this offseason as part of the Odell Beckham Jr. trade. As of right now, Jermaine Whitehead is slated as the starting SS and he will get the first crack at the job. The Browns also brought in Morgan Burnett, the longtime Packers safety, during free agency and they got Eric Murray in return for Emmanuel Ogbah from the Chiefs, but he’s more of a third safety/hybrid nickel type player. They also drafted Sheldrick Redwine in the fourth round out of Miami in this year’s NFL draft, so he should have plenty of opportunity to compete for a starting job as well. Other names include Tigie Sankoh who was the Browns’ international player on the practice squad last season and JT Hassell who is an extremely intriguing option.

JT Hassell’s path to the NFL is about as unique as it gets. Since birth, JT has only had two fingers on his left hand, but it hasn’t stopped him from successfully chasing his NFL dream. Hassell started his collegiate career at South Dakota State, but he transferred back home to division II Florida Tech after his sophomore season because he wanted to be closer to his child. He was used at both schools as a thumping, 200-pound outside linebacker, and he had 124 tackles on his way to D2 All-American honors last season. Those numbers were enough to get the attention of the Cleveland Browns, especially after he ran a sub-4.40 40-yard dash in front of NFL scouts. The Browns even gave him a Top-30 visit, so it’s clear that the team is very high on him, and they will likely do what they can to keep him around. JT Hassell should be everyone’s fan-favorite to make the team, but he’s just getting started.