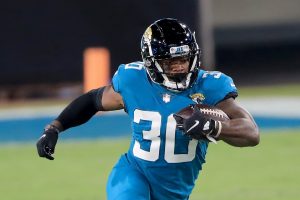 I wanted to talk myself into putting Robinson at one, but this is the top fantasy league winners. To me, a league winner is someone you can find a little later in drafts that can produce top-ten-like numbers. With Robinson going earlier due to Travis Ettienne’s injury, I felt it was unfair to put him at one. However, I think that getting Robinson at running back 16 is an absolute steal. People forget Robinson ranked as the seventh best fantasy running back last season when having a backfield to himself. Robinson produces both on the ground and through the air. He was ninth among running backs in terms of receptions last year and rushed for over 1,000 yards. Drafting Etienne, we can assume that the Jags wanted the Clemson connection, but I also think it provided a window to the Jags offense. It seems as if Urban Meyer is ushering in Lawrence by providing him with a guy he can check down to at all times. With Ettiene out, that sole responsibility will be on Robinson once again. However, this year he will be in a much more high-powered offense that will provide even more opportunity. Robinson getting drafted that late for a guy who finished in the top-10 and is in a much-improved offense is a head-scratcher for me.