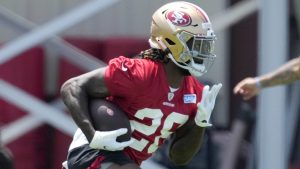 Every fantasy owner’s supposed “sleeper;” this kid is way past sleeper. There is no secret that Kyle Shannahan loves to use his running backs and Sermon could be the best one that he has. Shanahan loves to go towards the hot hand, which is how Raheem Mostert became the featured back in San Francisco. Before Shanahan’s arrival, Mostert was very unimpressive. It seemed unlikely that an undrafted pick with his seventh team in his fifth-year team would get the amount of work that Mostert did, but Shanahan played the hot hand. With Mostert continuously being banged up and coming up on 30 years of age, the 49ers backfield is becoming even thinner. They lost Tevin Coleman and Jerrick Mckinnon and Jeff Wilson battles injuries in his own right. It seems as if there is an opportunity for Sermon to be a fantasy stud. In his last three games where Sermon was the featured back at OSU, he combined for 636 yards on 79 attempts. When he gets the ball consistently, Sermon has one of the hottest hands there is, which is probably why Shanahan and the 49ers took him in the second round.