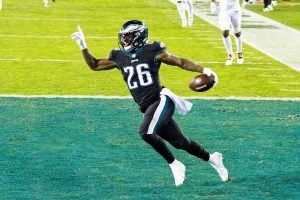 Sanders was ranked as a top-10 Fantasy running back going into 2020 fantasy drafts, but his value quickly spiked after the Eagle’s horrific season and Sanders constantly battling injuries. While the Eagles still have questions that need answering, it seems as if they have addressed at least some of their issues. Their offensive line is much improved with veteran offensive guard Brandon Brooks and offensive tackle Lane Johnson set to make their returns; as well as young stud left tackle Jordan Mailata. The Eagles also added to their receiver group drafting a number one option in Heisman winner Devonta smith. With there being no quarterback competition (as of now) for the Eagles (there’s still time), Miles Sanders is in a better position than even last year. He is an elusive back that can catch the ball out of the backfield. Coupling having the backfield to himself, Sanders also has a quarterback that can use his legs. The change in coaches will also bode well for fantasy owners. Sanders’ career-high in carries came in 2019 where he toted the ball 179 times. In his three seasons with the Colts, head coach Nick Sirianni has given his lead-back a large workload. None of Sirianni’s featured backs have gone under 190 attempts. While former head coach Doug Pederson has never had a lead-back tote the ball more than 190 times.