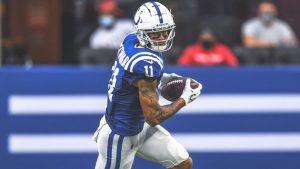 Last year fantasy owners were high on Pittman not only because of his skill set but the lack of wide-receiver depth for the Colts roster. This year is more of the same with another year of good, but aging, wideout T.Y. Hilton (who is injured) and a banged-up Parris Campbell. Pittman stands as the go-to guy in Indy this season. Carson Wentz may not have had the best 2020 season with the eagles, but he is still young and has a rocket arm. Pittman is a hybrid wideout that can line up on the outside and inside. Pittman has next-level speed and is a big play waiting to happen. He has the potential to be a Julio Jones type of wide receiver. With Philip Rivers on his last leg, it was hard for the Colts to get the production out of Pittman they needed; but now it looks as if he is a focal point of the Colts offense. Even his teammates are high on Pittman. Jack Doyle told the Indy Star: “Pitt is awesome, he has so much ability, you want to teach people how to play that way.” Prepare for Pittman to have a breakout year.