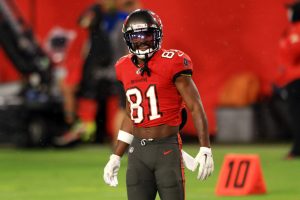 We forget that Brown missed the majority of the 2020 season due to his suspension. In the last three games of the year, Antonio Brown finished with the fourth-most fantasy points among wide receivers, outranking Tyreek Hill, Deandre Hopkins and both of his running mates Mike Evans and Chris Godwin. Last year, there was significant hype surrounding Chris Godwin’s fantasy value attributed to how many slot receivers careers TB12 has made. Overall, Godwin’s performance was a disappointment compared to his ADP and it seemed as if later in the year, Antonio Brown became the go-to slot guy that managers thought Godwin would be. According to Pro football focus, Brown was targeted 62 times in eight games. Which was 21 less than Godwin in his 12 games and 46 less than Evans who played in all 16 games. Brown’s average target share was more than both Godwin and Evans and he would have been projected as the Buc’s number one ride receiver if he had been able to go in all 16 games. Even though Brady has been beating father time, he is still not the same guy who was throwing 80-yard bombs to Randy Moss, which makes the short game all the more important. Brady and Brown have meshed on and off the field, so Brown in the slot should call for immense upside. However, Godwin and Evans are still there and are still two of the best receivers in the NFL; Brown lands at nine for me.