The Browns have a rich tradition in the NFL. The team has seventeen players inducted in the Pro Football Hall of Fame. There are another five players in the Hall who spent part of their careers with the Browns, as well as, two coaches who played for the Browns. The Browns began playing in the All-American Football conference in 1946 and joined the NFL in 1950. The team won the championship in all four years of the AAFC (1946-1949) and played in the next six NFL championship games winning three, 1950, 1954 and 1955. The team also won the NFL championship in 1964 – their last. During this span of incredible winning and incredible losing, the Browns have had a long list of great players. This article will attempt to pare down this long list to ten players. The criteria for this top-10 will involve the players years as a Brown, their impact on the team and their impact on the game. 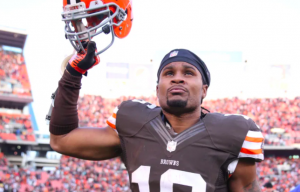 An undrafted free agent out of Kent State, the former college quarterback transitioned to WR with the Browns. He also played RB and QB, but his claim to fame was as a return specialist. Cribbs still holds the Browns record for most kickoff yards (8837). In 2009, he set the single-season Browns record for all-purpose yards (2510) and still holds the Browns all-purpose yards record (12343). Cribbs had eleven career touchdowns on punt and kickoff returns.