Browns Offense and Defense Can’t Get On Same Page 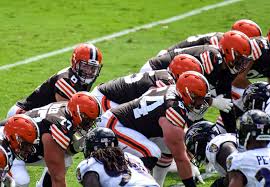 This Browns season has been like riding a roller coaster. There have been ups and downs, dips and curves that just keep us all guessing at what’s going to happen around the next bend. When the Browns offense has been hot, their defense has been ice cold. When the Browns defense has performed well the offense has struggled at times. I’m far more concerned about the defense at this point and exactly what we have going forward.

I’ve shared previously my concerns with Browns defensive coordinator Joe Woods and I still have those same concerns. He’s never had great defenses in the past with the Browns or other NFL teams he’s worked for. The inconsistencies in his defenses are alarming. Do we blame the players or the coaching? Five weeks into the season I’m more inclined to blame the coaching and the lack of consistent communication. Mistakes are being made regularly and that is a big problem moving forward this season.

The Browns offense has been running up the yardage like they did this past week in gaining 531 yards and scoring 42 points. But they lost the game because they couldn’t close the deal and that type of thing has happened a few times this season. If the Browns offense and their quarterback Baker Mayfield had been able to run a few plays late in both this past week’s Chargers game and the Chiefs game in Week 1 then this team is 5-0. Let’s hope for some better consistencies on both sides of the ball next weekend against the Arizona Cardinals.