Nick Chubb Not Being Used Effectively By Coach Stefanski 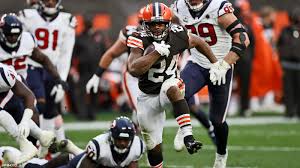 My biggest issue with coach Stefanski at the moment is his inability to recognize the talent he has in his running back Nick Chubb. Now I know the Browns have been using their running game, tops in the NFL in terms of rushing yards gained pretty well so far this season, but after another late game letdown, I’m really questioning Stefanski’s use of Chubb or lack thereof. It’s inexcusable that Stefanski left Chubb on the sideline the last couple of offensive drives after he had ripped off so many dynamite runs capped off by a superb 52 yard scamper to the house in the game against the Chargers.

Chubb finished with 161 yards on 21 carries in the game against the Chargers, but he could have easily had over 200 yards and would have likely secured the win for the Browns if Stefanski would have trusted his running back. I get that the Browns also have a great running back in Kareem Hunt and he’s been outstanding this season as well. It’s simply though that in games where the Browns are in the lead and looking to put away the game, Stefanski hasn’t relied on Chubb in crucial situations. Watching Chubb stand along the sideline those last couple of series against the Chargers was unacceptable. Your leading rusher and game changer has 523 yards and four touchdowns this season. He also has 24 runs of over 10 yards and five runs of over 20 yards this season. So why again was he missing at the end of the game?

Earlier in the game after that long touchdown run, Stefanski left Chubb off the field on the following Browns possession. Again, I get it to a degree that Stefanski is trying to divide the load of runs between the two backs, but when you have a back like Chubb gashing a defense like he was this past week and to not go with the hot hand is bad coaching.