This Browns training camp and first two preseason games have certainly had many different storylines, From serious injuries to players, to a potential backup quarterback battle, which in the end didn’t really develop like I’d predicted. There have also been several young Browns stars starting to produce and that has this fan pumped to see how they progress as the season starts in a few weeks. Here are a few players that have stood out of the crowd. 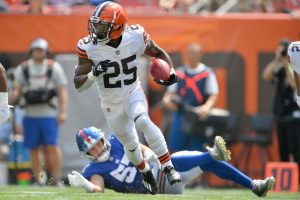 Even though Demetric Felton was drafted in the later rounds of the NFL draft, his training camp and preseason games have been very impressive. The rookie out of UCLA can play about any position on the field and the Browns are moving him all around the field, from running back, to wide receiver to punt returner.

In his first preseason game against the Jacksonville Jaguars, he snagged four passes for 44 yards including a nifty screen pass he took for 25 yards. He took a kickoff and a punt return for little yards but he’s being asked to do a lot, especially for a late-round rookie. In the second game this past week against the New York Giants he ran the ball eight times for 25 yards. He also caught a 12-yard pass. He ran back three punts for 21 yards too.

He hasn’t broken a big one yet, but he’s that type of player that just is a pest to the other team’s defense and as Browns fans we love it. I’d expect to see the rookie take the opening day kickoff against the Kansas City Chiefs back for six points!