I wrote a Faceboook status after the final regular-season win for the Browns. Here it is: 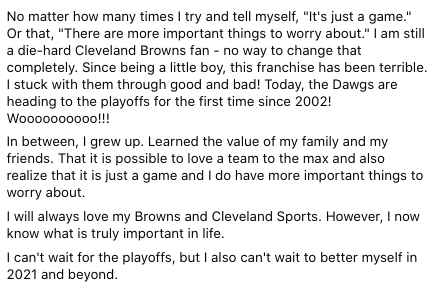 Today, here we are. It’s gameday and the Browns will do battle against those very Steelers way back from the playoffs last time. Much has changed in everyone’s life as 18 years have passed since that matchup.

In that status, I was trying to come to grips with the magnitude of this game. What I learned over the course of this week is just how much this game does mean to Browns fans and this city in its entirety. Now, that doesn’t mean a person has to disregard family, good health and other positive parts of life to love the Browns. That would be silly. However, today is an important day for our football team. The men who do, in fact, play a game.

What this game represents for Cleveland is so much more. Just take a look at this post:

Thus, this is obviously huge for fans. Not just for these playoffs themselves, but to rectify past history here in Cleveland. It’s time for a Rocky quote:

The Browns are now actually contending for a Super Bowl. It’s been a while, but this team can’t give up with just making the playoffs. That’s why this game is so important.

I wasn’t alive the last time the Browns won a playoff game back in 1994. Making the playoffs was exciting, but there is so much for this team to accomplish this year. It isn’t going to be easy, but it starts tonight in Pittsburgh against the rival Steelers. The Browns will be without their head coach due to the Covid-19 virus, but the proper changes will be implemented.