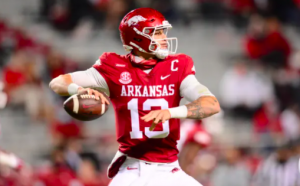 Jordan Harris says “Starting out his career at Florida, Feleipe Franks transferred to Arkansas during his final season. Before transferring, he recorded 698 passing yards, five touchdowns, and three interceptions, completing 76.1% of his passes prior to a season-ending ankle injury in 2019. Quickly welcomed at Arkansas, Franks revitalized himself and infused energy into a program fresh off of a 2-10 season. Franks unlocked new levels in his game that didn’t seem to be apparent during his time in Gainesville. At 6-foot-6, he’s a tall passer that has average traits all around.”

As the draft draws closer, I’ll be honing in on certain players in certain rounds in my upcoming mocks. If you disagree with this mock, please don’t hesitate to let me know. I have extremely thick skin, I’m from Cleveland.

CRAZY FOR MORE??? HERE IS A LINK TO THE ORIGINAL MOCK DRAFT!!!!!