With Friday’s draft trades involving Miami, San Francisco and Philadelphia, it’s possible that four quarterbacks could be drafted in the first five picks. How does this affect the Cleveland Browns? The more quarterbacks drafted in the top-10 forces better players down the draft board to the Browns at pick number 26. GM Andrew Berry is pretty much done in free agency with the exception of possibly another defensive end (Clowney?) and one more outside cornerback (Hayward, Smith or Conley?). With that said, it’s time to concentrate on the NFL draft. For this mock draft, I’ll be using the big board and analysis from https://thedraftnetwork.com/. The player breakdowns are provided by TheDraftNetwork’s Kyle Crabbs, Drae Harris, Joe Marino and Jordan Reid. 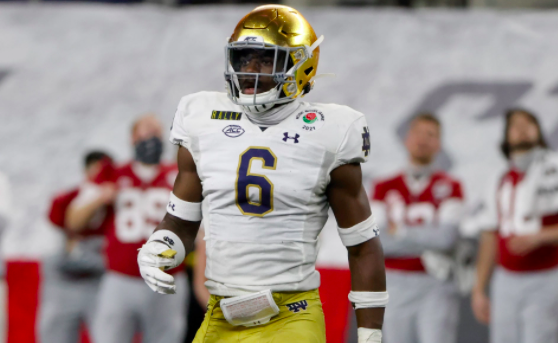 “Projects as an impact defender at the NFL level. There’s an undeniable level of explosion to his game that helps Owusu-Koramoah mask the limitations of his game on account of his stature. An ideal match from a team perspective would be one that wants to stay in their base defensive personnel at a higher than average rate, where Owusu-Koramoah’s versatility can shine brightly against spread sets.”

CLICK HERE TO VIEW THE NEXT BROWNS DRAFT PICK!!!