The young kid Larry Nance Jr. grew up in Northeastern Ohio where his dad Larry Nance Sr. raised his son. This being after he had a great career as a Cleveland Cavalier back in the late 1980s and early ’90s. Nance Jr. has been traded from the same Cavaliers to the Portland Trailblazers, via a three-team trade, including the Chicago Bulls. The Cavs in return got another big man in seven-footer Lauri Markkanen, who is more of a long-distance three-point specialist.

Nance Jr. had been with the Cavs over the last four seasons when the Cavs got him from the Los Angeles Lakers back in 2017. When he returned to Northeastern Ohio it was a homecoming of sorts as he grew up in the Akron area. Having had his father play with the past great Cavs teams, Nance Jr. became a fan favorite.

This departure for Nance Jr. is somewhat of a sad moment, but Nance Jr. will have a new opportunity in Portland with a more veteran team, while the Cavs adding Markkanen will be interesting because he’s a young player that can likely help on the offensive side of the floor especially since he’s a good three-point shooter and the Cavs have lacked that type of player.

Add in the fact that the Cavs now have three very athletic seven-footers on their team including newly drafted Evan Mobley, out of USC and Jarrett Allen, who just re-signed with the Cavs this off-season and we have a bit more of an athletic and better scoring team. 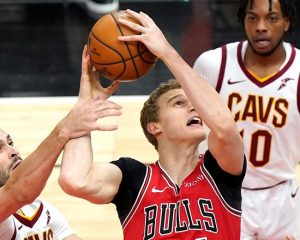