Training camp is now officially underway, which means the preseason and regular season are just around the corner. There’s a ton of excitement surrounding the team with the star talent headlining an improved roster. Baker Mayfield is ready to take a big step in year two, and America’s team, the Cleveland Browns, are ready to make some real noise this season. Before we get to what should be the best and most exciting season since the Browns returned in 1999, we still have to continually build the hype with training camp and preseason football. Everyone knows Cleveland has the star power to get to the playoffs for the first time since 2002, but this is the time the Browns front office and coaching staff will try to figure out who will fill out the rest of the roster. Depth is a real need and potential issue for Cleveland at a few different positions, but there are definitely some under the radar guys on the roster already that could be players to watch leading up to the season. 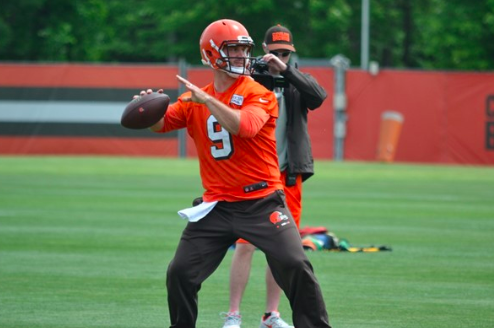 Baker Mayfield is ready to set the league on fire in his second season. In his rookie season, he broke the NFL rookie passing touchdown record with 27 TDs and threw for 3725 yards on 63.8 completion percentage. This year, he’s coming in as the obvious starter from day one and he now has one of most dynamic talents in all of the NFL, Odell Beckham Jr, to throw to. I think it’s possible that Baker is still severely underrated by many media outlets though, but I don’t think it’s unreasonable to say that he has the potential be one of the all-time greats as his game is reminiscent of a young Brett Favre.

There’s just one problem; who’s behind him?

I think this is something that’s blown out of proportion a bit because if Baker were to unfortunately miss an extended period of time, the season is basically a wash anyway. Drew Stanton is a very solid backup quarterback that received heavy praise from Bruce Arians during their time together in Arizona. Stanton has a ton of NFL experience being drafted back in 2007 and he has to have some substantial knowledge that he brings to the quarterback room or he wouldn’t still have a job. The bottom line is that the depth chart really doesn’t matter all that much after Baker, but Stanton can provide some guidance to the young quarterback and more than likely help out a ton in the film room.

The Browns have quite the talented running back room if everyone is eligible and healthy lead by Nick Chubb, Duke Johnson and the suspended star back, Kareem Hunt. Since Hunt is suspended for the first eight games of the season and Duke is seemingly on the trade block but in no rush to be dealt, there’s still room on the roster for at least one more running back.

The favorite for that roster spot is probably second-year player, Dontrell Hilliard. Hilliard appeared in parts of 11 games for the Browns last season, but he didn’t register single carry. However, he showed his worth on special teams as a capable kick returner and he even flashed in the passing game catching 9/10 targets for 105 yards. So far this offseason, Hilliard has been drawn rave reviews, and he’s been so good, that some view him as the eventual replacement for Duke Johnson (if he is indeed traded at some point). Considering all the noise surrounding how good he’s looked this offseason combined with the fact that he produced in his limited role last season as a UDFA proves that Hilliard should be a player Browns fans may want to familiarize themselves with.

The Browns have arguably the best receiving corps in the NFL, which gives Baker Mayfield plenty of weapons to get the ball to. The groups features two of the best players in the NFL, a young speedster with limitless potential and a reliable, underrated former 5th round pick.

Fans are going to be amazed and shocked at just how good Odell Beckham Jr is on every play. The separation Odell can create with his routes along with speed, athleticism and incredible hands is something people need to take a closer look at before they understand just how special of a player he is. The highlights don’t do this guy justice and if he could put up the kind of numbers he did with a declined Eli Manning, just imagine the damage he’ll do with the young gunslinger, Baker Mayfield.

The Browns have paired him with his longtime best friend, Jarvis Landry, who has 481 receptions through his first five seasons, which is 55 more than the next closest player in NFL history, Larry Fitzgerald. Amazingly enough, that’s not it. They also have Antonio Callaway, who is one of the fastest players in the league. Callaway can really stretch defenses with his blazing speed and if he stays out of trouble and keeps working on his route running and finding the open space, there’s no reason he couldn’t develop into a pro-bowl caliber player. The fourth guy on the list is Rashard “Hollywood” Higgins who seems to get better and better every year since he was drafted in 2016. He has a proven rapport with Baker Mayfield, and according to Pro Football Focus, he caught nearly 77% of his targets in which he produced nearly 15 yards per reception.

Typically, teams keep five or six receivers on the roster and they have a pretty strong group of depth guys to choose from including Damion Ratley, Derrick Willies, Jaelen Strong and Blake Jackson along with rookie UDFAs Damon Sheehy-Guiseppi, Dorian Baker and DJ Montgomery. While I think Ratley, Jackson, Baker and Sheehy-Guiseppi could all make cases for a roster spot, I’m most intrigued to see what Derrick Willies will offer in his second season. He’s 6’4 with great footwork, plentiful athleticism and a massive catch radius that immediately caught my eye the first time I watched him in person last training camp about this a year ago.

Willies apparently made a strong enough impression last year as he was kept on the active roster, and in the first matchup against the Ravens, he had three catches for 61 yards. This included a 39-yard catch and run in overtime that set up the game-winning field goal in the victory.

Unfortunately, what could’ve been a huge confidence boost leading to a breakout for Willies ended all too quickly when he landed on injured reserve with a broken collarbone only a couple days later. Coming into year two, it’s possible that many fans have forgotten about him, but he flashed a ton of potential in his lone opportunity, so there’s a chance he could develop into a nice player for the Browns.

The tight end room is basically already figured out in my opinion. David Njoku is the obvious starter as he taps more and more into his tremendous potential every passing season while Demetrius Harris reunited with John Dorsey to be the backup. Both of these guys are super-athletic and can really jump considering Njoku’s high jump and Harris’ basketball backgrounds. Njoku could have a huge year and be on the field as much as possible, but Kitchens ran quite a bit of two tight end sets down the stretch last year, so there’s still some opportunity for playtime. With that being said, there is still a need for at least one more tight end on the roster and it’s possible that someone is being severely overlooked.

Two seasons ago, Seth DeValve was second on the team in both receiving yards and receptions as the back up tight end. However, last season he only had five catches as he struggled to get healthy enough to see significant playtime. He may have fallen out of favor with some and if he can’t get healthy and stand out, he could be a cut candidate. There’s still a chance though that if DeValve stays healthy, he could be yet another weapon for Kitchens to get creative with. DeValve is pretty athletic, which seems to be the Browns’ theme with tight ends. He played wideout in college at Princeton and he’s proven to be a solid receiver throughout his career. However, he’s also a pretty good blocker, too, so DeValve could not only be used as a tight end but maybe as a fullback as well.

The state of the Browns offensive line is interesting. If there’s any position on the offense that could use an upgrade, it’s probably the line. The loss of Joe Thomas can never be replaced and they dealt away one of the best guards in the NFL, Kevin Zeitler, to the New York Giants this offseason. The Browns still have Pro-Bowl left guard Joel Bitonio and an above-average center with JC Tretter. Their tackles, Greg Robinson and Cam Hubbard, are average at best, but they did their jobs during the second half of last season. There’s still a hole to fill at right guard, but they have plenty of guys that could win the spot including: Austin Corbett, Eric Kush, Kyle Kalis and Bryan Witzmann. Beyond the starters, there’s still plenty of other guys battling for depth spots on the offensive line.

While Willie Wright seems like another player to keep in mind, Drew Forbes is probably much more likely to make the roster than him. Forbes is the Browns’ sixth-round pick from this year’s draft out of Southeast Missouri State. He’s 6’5 and about 300 pounds, which gives him prototypical tackle size. Forbes reportedly had a ton of interest from NFL teams in the later rounds, but the Browns were the first to pull the trigger on the player dubbed as “Prospect X” by Sports Illustrated. The popular media outlet called Forbes “the draft’s deepest sleeper” and hall of fame executive, Gil Brandt, has Forbes as his 105th ranked player in the entire draft. The Browns selected Forbes at 189, so they may have gotten tremendous value here if Brandt’s rankings hold true. He’s been under the radar his whole football career only going to a small local school, but there’s a chance he could develop into a starter on the offensive line soon enough making him a name to get familiar with shortly.