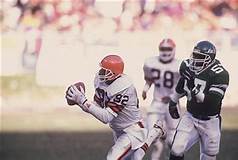 This will be forever my favorite moment as a young Browns fan. I had the opportunity to be there inside that old Municipal Stadium and it was well worth the memory. Back then, before the age of Ticketmaster and cellphones, you had to actually go down to the actual stadium the week of the game and stand in the cold morning air of the winter to try and get a ticket. That was part of what used to make the Browns experience even more memorable.

With tickets in hand, the game played out with the ups and downs of a special game. The previous season Cleveland had gotten to the opening game of the playoffs in 1985 to play the Miami Dolphins and lost a heartbreaker.

This game against the Jets would be different, fans had hoped, and boy was it. With a little over 4 minutes left in the game, the Browns stormed back and tied the game up.  The game headed to overtime. In overtime, both teams actually had chances at winning with field goals and both teams failed and so we went and at the very end of the second overtime, the Browns kicker Mark Mosely finally kicked the winning field goal. It had been nearly two decades since the Browns had won a playoff game. Dreams do come true. What I remember most at that winning moment was the celebration that followed in the stadium. I was hugging folks I didn’t even know and yet we were all loyal Browns fans and that was enough on that day.