The red flag is out on the field.

Any sports fan knows that’s a coach in the National Football League challenging a play. These reviews have overturned calls that would have decided a game one way and instead it ends differently.

This year, the NBA is bringing the challenge to its league. However, there is a major problem with the implementation. A coach only gets one challenge a game. The major issue is that even if a challenge is successful, the coach does not get that challenge back to use later in the game.

Let’s say a blatantly obvious call was missed by the referees with 11 minutes to go in the first quarter. As a coach, this brings up a dilemma.

What if later in the game, during the crucial moments of the 4th quarter, another call is missed with the game tied? That coach spent the challenge early in the first. Even though it was won, there are no more to use. A wise coach with the current rules would save the challenge for late in the game no matter what happens early on.

Now, the NFL gives each coach two challenges. If both are won, a third is awarded to that team. This has worked and is how the NBA should run its new challenge system.

A reason for giving two challenges to start each game is good is that coaches would still be afraid to use the single challenge, even with the chance of getting it returned. What if the play gets reviewed and the apparent call is still missed? The single challenge is gone. A second challenge, even if the first is not overturned, allows for more freedom for the coaches to gamble a bit.

The NBA is on the right track with a system that allows for challenges. It’s simply that the least they could do is give back a winning challenge. Moreover, two challenges to begin each game would be even better.

Below, via the NBA’s website, are all the rules about the current challenge system. Learn more about what can or can’t be challenged and more! 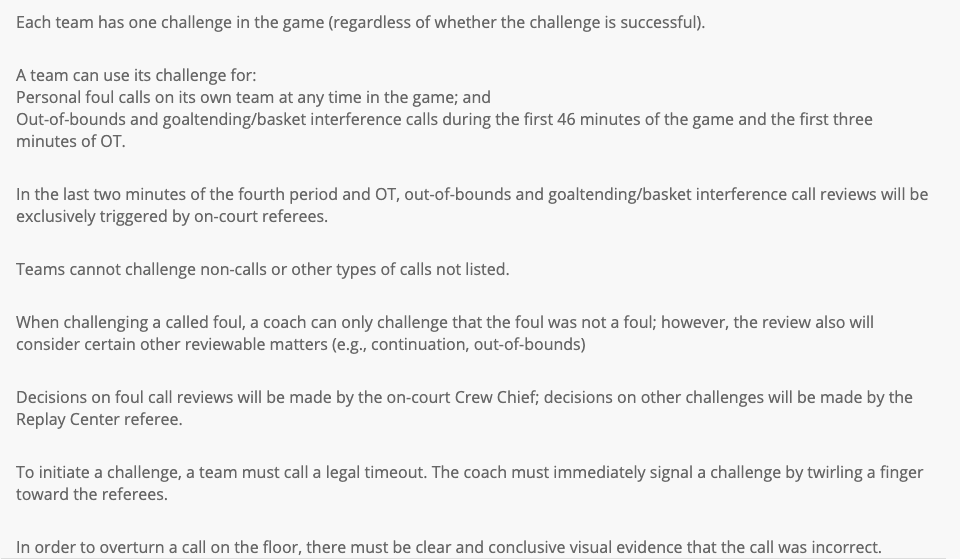