The first time Browns DE Myles Garrett will be back on the field against the Pittsburgh Steelers since the helmet incident on November 14 of last year. The Browns actually won the game, 21-7, but it was the swinging helmet that got everyone talking and Garrett suspended for the final six games of the year. This included the second matchup against the Steelers, a 20-13 loss in Pittsburgh just a few weeks after.

Now, nothing noteworthy happened in that second game, but the guilty party was suspended and off the field.

My opinion on the incident?

Garrett claims Rudolph called him the N-Word. Rudolph also tried to approach Garrett post-tackle and take his helmet off first. What Myles did was very wrong (obviously), but it could have been avoided if players on both sides kept their cool. If someone called me a racial slur, I’d be pissed, too.

This year, the Browns are 4-1, the Steelers are 4-0 and not only will Garrett be on the field, but he is also playing some of the best football in the entire NFL. Six sacks, three forced fumbles, two fumble recoveries. A menace for the opposition to block each and every play. It will be hard for the Steelers to slow down a player that is always good, yet certainly has a chip on his shoulder because of the aforementioned incident against their team. 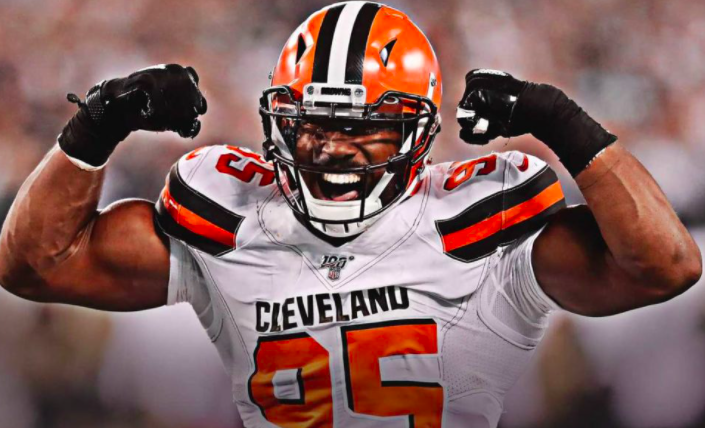 It will be very interesting to see if there is any additional hostility on Sunday at Heinz Field because of last year’s helmet smash. The Browns haven’t won in Pittsburgh since 2003. Certainly, the franchise is keen to end that horrific losing streak…

Any type of ejection due to foul play or extracurricular activity does not help the Browns’ ultimate goal of winning in the slightest. Thus, allowing what happened last year to creep into the minds of the players would not be good, especially if it led to any type of brawl between teams.

Additionally, remember that last year’s Browns were not going anywhere (record-wise) at all. With or without Garrett for those final six games, it wasn’t going to change very much (finishing at 6-10 and second-last in the division). The difference this year is that the Browns, at 4-1, are actually playing with a purpose and a reason each and every game.

Obviously, there is no way to 100% predict the future. If I had to guess, I would say that there may be a bit of pushing and shoving between the two squads. Nothing to the magnitude of a helmet swing at another player’s head in retaliation or anything of that nature.

Just remember – it was a rivalry before that game last year and it will be a rivalry on Sunday and beyond. There will always be something in a Browns/Steelers affair.

Lastly, from all accounts, Myles Garrett is not only a great player but also a great guy, too. Sure, he made a mistake on that Thursday night last season. Don’t we all? Hopefully, the defensive end learned from it and it simply becomes a part of the past.

A win over the undefeated Steelers in Pittsburgh would be HUGE for these Browns!