Baker Mayfield was drafted by the Browns in 2018 and what he has produced in these three years is truly legendary. If he can add longevity to his career, like Graham, Kosar and Sipe, then Mayfield will be the most memorable quarterback in Browns’ history. I’ll start with this stat. He has 75 touchdown throws so far. That is by far greater than anything the previous three Browns quarterback legends have done.

In Graham’s first three seasons with the Browns, he totaled 67 touchdowns, Kosar only had 47 touchdowns and Sipe managed to get to 75 touchdowns by year four.

When you really start studying the stat lines for Mayfield and comparing them to other NFL legends, like quarterbacks Joe Montana and Peyton Manning, you’ll soon realize what Mayfield is doing now in Cleveland is historic. Montana only had 62 touchdowns thrown in his first three seasons, but Manning did have 85 touchdowns thrown in his first three seasons. It’s very rare company that Mayfield is in right now. And barring an injury (knock on wood!) I don’t see Mayfield slowing down. The victories will grow for the Browns and Mayfield and the “Baker Mayfield Flag” will only be cemented more securely at the 50-yard line of First Energy Stadium. 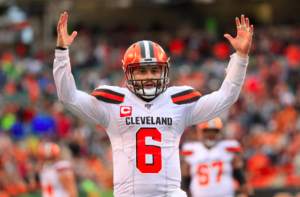