The official start of summer has arrived with Memorial Day and with summer it has me thinking about a Cleveland Browns training camp around the corner, but also about vacation and all those places I want to head to. One place that folks love to visit is Mount Rushmore out in South Dakota where the greatest United States presidents are shown carved in the side of a mountain in the Black Hills.

Instead of seeing Abraham Lincoln, George Washington, Teddy Roosevelt and Thomas Jefferson, what if we Cleveland Browns fans could picture our favorite Browns quarterbacks of all time?

My all-time Browns quarterback greats include the legend it all started with in Otto Graham, my two childhood quarterbacks I had the chance to grow up with in Brian Sipe and Bernie Kosar and now current Browns quarterback Baker Mayfield. Before any of you question our current quarterback and belonging on that side of the mountain, go look back at his first three seasons stat sheet and then try to downplay his growth as a legendary quarterback.

Let’s though, start with Otto Graham.

The history of the Cleveland Browns and their dominance in the 1940s through the mid-1960s has everything to do with what Otto Graham contributed to the team. He helped the Browns reach the championship game 10-straight years between 1946-55 and they won seven of those including four-in-a-row between 1946-49. Enough said. All those today that want to give Tampa Bay quarterback Tom Brady the GOAT status should really take a better look at Graham’s dominance when he played. In one stretch between the 1947 and the 1949 season, they won 29 games in a row including the 1948 undefeated season.

When the Browns moved over to the NFL in 1950, most around the NFL doubted Cleveland’s success and yet the Browns opened that season crushing the previous NFL champs, the Philadelphia Eagles, in Philly, 35-10. That same season, the Browns defeated the LA Rams for the NFL championship. So much for the NFL being such a competitive and dominating force. 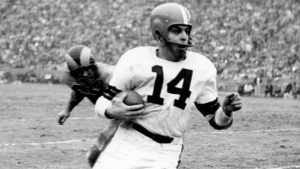