The Lindor Trade May Not Be as Bad as it Seems

Everyone may have known this move was coming, but it was still a disappointing headline to read: Francisco Lindor is being Traded to the New York Mets.

Baseball social media was quick to react to the news. Many blamed owner Paul Dolan for Lindor’s time in Cleveland having to end so soon. He was even trending on Twitter the day the news broke, being called a cheapskate, told to sell the team, etc. It seemed like everyone felt Indians fans’ pain due to the scrooge who owns their team.

This was all because the public’s perception was that the Tribe’s return for their franchise star along with SP Carlos Carrasco, one of the Indians’ longest-tenured and best players of the 21st century, was atrocious.

This deal may not significantly benefit the Indians in the short term, or be as big a package as fans were expecting, but years down the line, like many of the trades the Indians’ front office has made before, we may look back and realize the Indians did not fare as badly as we thought.

To make it clear, this is not saying the decision to trade Lindor was the correct one. He has been a generational talent and losing him is huge. It is just another instance of the economics of a small market team.

No matter what we want to say, the deal is done. All we can do now is look at what the past can tell us about these trades, look at the return from the deal and speculate about the future of this organization.

The majority of people who look at what the Indians receive in return for Lindor and Carrasco would most likely believe it is a subpar return. They didn’t get the Mets’ top prospect and they didn’t get a big name player (though no one thought they would). So even if the Indians have a great front office, how could this deal possibly be good for the future of this franchise?

The person who put it best was former Cleveland Indian and now an analyst for SportsTime Ohio, Jensen Lewis, who wrote on Twitter, 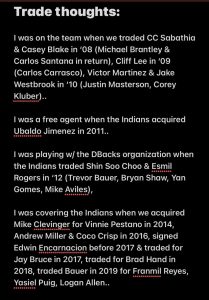 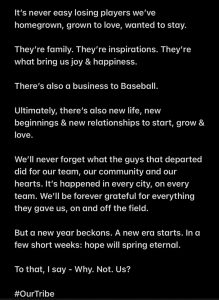 If there is one term fans should remember when judging this trade, it’s to trust the process. We have seen this over and over again with the Indians’ front office. The deal might not look great on paper, but the front office knows how to scout and develop players. The prospects the Tribe received in return may not be the highest rated with the highest ceiling, but they are players that the front office thinks can become good players that will hopefully try to make up for the loss of Lindor and Carrasco.

Now, when you get into the details, the deal begins to make more sense.

Reports have come out stating that the runner-up team in the Lindor sweepstakes, the Toronto Blue Jays, offered higher-rated prospects with higher ceilings. Why wouldn’t the Indians accept this deal to improve for the future? Unlike other small-market teams, the Indians claim to not want to fall into a rebuilding phase. Like we have seen in the last few moves when trading stars, instead of getting the best prospects available, the Indians tend to accept deals where they may not get the best players, but ones who can help them stay competitive right now along with prospects with higher floors and lower ceilings. This is likely because management feels they can stay competitive with their current pitching staff.

Looking at the players the Tribe received, two that will make an immediate impact will help fill the void in the infield. Andrés Giménez (the Mets former #3 ranked prospect) and Amed Rosario will likely take the places of Francisco Lindor and Cesar Hernandez at second base and shortstop next season.

Giménez, who finished tied for seventh in National League Rookie of the Year voting last year, has shown some promise on the diamond in only 49 MLB games. He hit .263, had a .333 OBP, and had a .732 OPS. On the other side of the ball, his physical attributes and instincts are all reasons why he has the potential to become a promising infielder.

Then there’s the other soon to be starter, Amed Rosario. In his four years in the MLB, the 25-year-old has put up a .268 batting average, .302 OBP, and a .705 OPS. In 2019, the last non-shortened season Rosario played, he put up a .287 batting average, .323 OBP, and lastly a .755 OPS. Rosario reportedly is a fast and athletic player the Indians can put wherever they need him. The Indians could look at him as a versatile position player, a future infielder, or outfielder.

As for the two other prospects the Indians received, Josh Wolf and Isaiah Greene, there is an article on Cleveland Sports Talk that you can read here.

We had all hoped that the Indians would not have to resort to trading Lindor and that he could be signed to an extension and play the rest of his career in Cleveland. Sadly, that’s not how the business of baseball works, and we now have to watch yet another big market franchise sign or trade for former small market players. But we can at least acknowledge that when looking at the circumstances, given the organization’s history with moves similar to this one, this deal may not be as bad as it seems.