All the games count. I mentioned that to someone the other day because they were saying, “Well the Cleveland Indians had only played the Detroit Tigers and Kansas City Royals!” After the inept offensive start by the Indians the first couple of games of the season, many fickle fans thought the sky was falling. Now that the Indians have strung together four wins in a row and swept the Tigers this past weekend, those same fans are bickering that it’s against lesser competition and somehow doesn’t mean anything.

As you start to dig into just what the Indians are doing well at to produce this recent stretch of success you don’t have to look very far to see where the success is coming from:

Before their Sunday matinees with the Tigers, the Indians’ most productive way of scoring was by way of the home run. The Tribe hit five home runs alone in their Saturday win. The Indians have 14 home runs as a team and that leaves them in second place among all MLB teams. Only Cincinnati and Houston have more. Tribe player Franmil Reyes has four of those 14 home runs. He also leads the team with a .333 batting average. 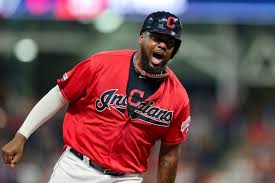