My dad would kill me if I didn’t take the $50,000 right away, no question. I think most parents would agree with this choice and be very upset if a child made the other decision. However, in my opinion, it’s a bit more complicated.

This dude said it:

But do you know the saying, “Money doesn’t buy happiness” ? It’s a classic that everyone has heard. (I didn’t make it up, haha)

From paying for college to a loan on an apartment/home or even a car from JAY Auto on the Bedford AutoMile here in the Cleveland area. It could buy an astronomical amount of burritos from Chipotle and that is really convincing, to be honest.

However, let’s think about this for a moment. This is the GOAT (Greatest of All Time) we are talking about!

Yeah, Jim Thome the Indians legend was probably my first Cleveland Sports Idol. However, LeBron James certainly took over as I grew up (25 now). Yeah, I hated his guts when he left in 2010. Yet I watch highlights of him and see the players he was working with and I understand his reasoning after all. Of course, the championship in 2016 allowed for forgiveness.

His childhood of basically nothing, turning into a baller, getting drafted by the Cavs, eventually winning said Cavs title and also titles with the Heat and Lakers. It was just announced that he is officially a billionaire which is amazing.

I don’t want the money.

Talking with LeBron at dinner would be such an amazing experience. I just can’t imagine the amount of Facebook likes I would get with the pose of us two. Probably like 37 or something. While I kid, the opportunity would be so amazing.

What would I ask LeBron?

First, we’d have to talk shop about basketball and the game itself. Especially his time(s) with the Cavs, what went into leaving, coming back, winning the titles and more.

Then, about how he became a billionaire and how he feels about having all of this money. Isn’t that ironic since I’m giving up 50k for this conversation?

Also, I would be so curious what LeBron orders or where, first off, he chooses to go eat? 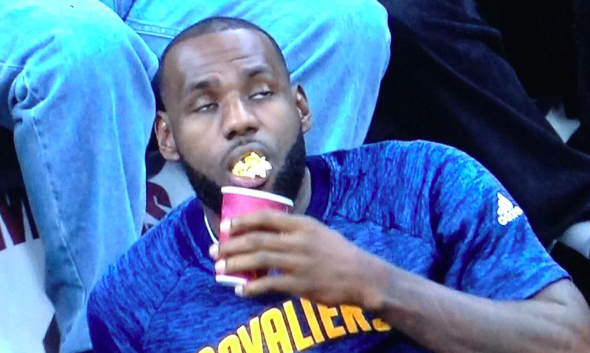 Does he go with the steak? Chicken? Just a salad to stay healthy? I don’t know…

What would I order?

Probably a steak. Gotta look tough for LeBron and such.

In summation, 50k would be awesome and I could get so much from that money. However, an experience with LeBron *insert swear word* James at a dinner would be something that I would cherish for an entire lifetime and would never forget it.

LeBron, if you’re reading this…call me!