The local kid from Toledo, Ohio, Deshone Kizer was drafted by the Browns in 2017 in the 2nd round of the NFL Draft. The Notre Dame quarterback had a decent college career but like so many previous attempts by the Browns to find that franchise quarterback, they forced Kizer into the starting gig way too early and what the Browns got was a historic season where the Browns never won a game in 2017 going 0-16.

Kizer would have flashes of good play only to make another mistake. He finished the 2017 season with 11 touchdowns and way too many interceptions with 22. He only connected on 53% of his passes. He had eight games that season where he produced zero thrown touchdowns. That’s pretty awful. To bookend that brief but rough 2017 season, Kizer was sacked seven times in a Week 1 loss to the Pittsburgh Steelers and in Week 16 he was sacked six times by those same Steelers in the season-ending game.

To Kizer’s credit, he is still in the NFL as a backup for the Tennessee Titans, but that year in Cleveland will remain the worst season ever in Browns history and he will forever be the quarterback of that dreadful team.

So the Browns “Pit of Despair” now has “no vacancies” and hopefully, no one else books a room there for a very long time. 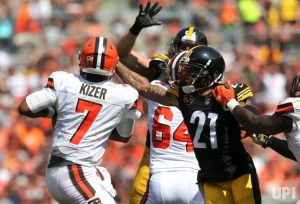