I’ll be the first to admit that when Johnny Manziel, the Heisman Trophy-winning quarterback out of Texas A&M was drafted by the Browns in 2014 at pick #22, I was excited like many folks in Cleveland. Manziel had a pretty good college career and he brought a lot of energy to a team that many were hoping would improve immediately with Manziel arriving in Berea. Instead, what we got was chaos, more chaos and many fans disgusted with Manziel in his brief time as a Brown.

Manziel had no work ethic and chose to party hard off the football field. He had no idea what a playbook looked like and quickly became the laughingstock of the NFL league. The 2015 season continued to be much of the same. He was involved in more publicized off-the-field mishaps and continued to miss games because of his irresponsible actions.

As for the football play itself, that was just bad. He finished in Cleveland going 2-6 as a starter and only threw for seven touchdowns in that time. So much for my excitement. I once bought a Browns t-shirt that had Manziel’s name on the back. That shirt was thrown in the trash soon enough, just like Manziel’s career. 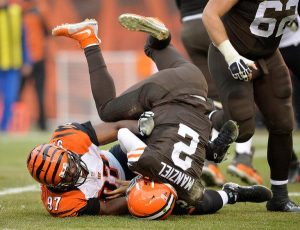