Cody Kessler, from USC, was drafted by the Browns in the 3rd round of the 2016 NFL Draft. Kessler made my list because he never won as a Browns quarterback, though brief, going 0-8 as a starter. He was the backup quarterback in 2016 behind Robert Griffith III and Josh McCown. Both of those quarterbacks were injured early in the season and Kessler was thrown in as the new starter. Kessler didn’t have as many blunders as the above-mentioned Weeden, but he never learned how to win games. He wasn’t prepared to be a starting quarterback and thus he lost all the time. There were flashes of growth, but in the end, Kessler should never be a starter for an NFL team. He finished his career in Cleveland only throwing six touchdown passes in his eight games as a starter. 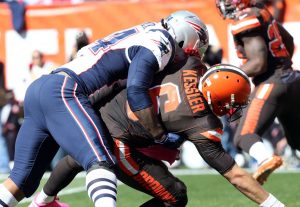