Does that cocky quarterback from Texas A&M, Johnny Manziel, that was drafted by the Cleveland Browns back in 2014, take the prize for worst Browns quarterback in history? Or do we go with the quarterback from Notre Dame, Deshone Kizer? Drafted by the Browns in the second round and thrown into the starting job because of a former Browns coach named Hue Jackson who had no idea what being a good coach meant and steered the Browns down a dark alley in its franchise history?

We’ve already discussed our Mount Rushmore of great Browns quarterbacks, including Otto Graham, Brian Sipe, Bernie Kosar and Baker Mayfield, but we haven’t established our “Pit of Despair,” referenced from the classic 1987 movie, The Princess Bride, in terms of worst Browns quarterbacks. Who heads down there?

Let’s also remind everyone at this point that the Browns have had 29 quarterbacks start a game for the team since 1999 and dozens of other candidates prior to that time. I’ll be concentrating on those quarterbacks of recent memory. Each of these quarterbacks also started at least eight games in their careers. Let’s begin…

Brandon Weeden was drafted by the Browns in 2012 as their #22 draft pick in the 1st round of the NFL Draft. He was 28 years old when the Browns drafted him out of Oklahoma State. He initially started out trying to play baseball professionally. He probably should have stuck with baseball. He was named the starting quarterback and immediately faltered.

In the Browns home opener, Weeden threw four interceptions and the team lost to the Philadelphia Eagles.  We should have predicted his career was destined to fail when he got caught under the American Flag prior to kickoff in the game. Not exactly, a moment to remember.

That season the Browns finished 5-11. The following season Weeden again started the year off as the starter and again the opening home game was against the Miami Dolphins. Weeden laid an egg in the loss where he threw three interceptions. The rest of that season he was injured and also battled out fellow Browns quarterback Brian Hoyer for the starting job.

The blooper highlight this season for Weeden when, for some unexplained reason, he attempted to underhand throw a pass late in a game against the cowardly Lions that was intercepted and sealed the Browns’ loss late in the game.

Weeden finished his career in Cleveland going 5-15 as a starter, only completing 55% of his passes and throwing 26 interceptions. 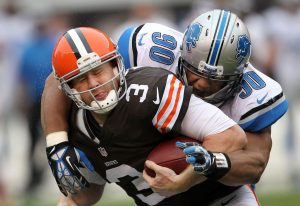