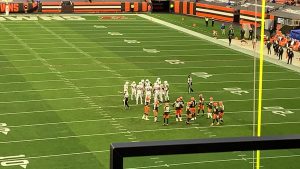 I was at the Week 5 matchup at FirstEnergy Stadium when the Cleveland Browns hosted the Indianapolis Colts. First of all, CBS made a mistake by not having Jim Nantz and Tony Romo broadcast this game (Click here to watch a video from UngarToTheMax about this topic). Second of all, it was a very exciting game that had a lot of ups and downs. But it was a fun and competitive game which felt like it could be a possible season-altering game (Click here to read an article I previously wrote about this very topic).

If you look back at recent games between Cleveland and Indianapolis, you will see that the games have been extremely competitive and close. Also, some of the games have been important in terms of the playoffs for one or both of the teams. Go back and look at the Week 14 matchup between the Colts and Browns from the 2014 season. The Browns were fighting for a wildcard spot and the Colts were right in the thick of the playoff race in their own regards. Cleveland was in control for most of the game and it looked like they were going to put themselves in prime position for the playoffs. However, they left a little too much time on the clock which allowed quarterback Andrew Luck and the Colts offense to move down the field and score the game-winning touchdown to secure a 25-24 victory. (Click here to watch highlights from the game). The win pushed the Colts record to 9-4 and the loss took the Browns record to 7-6.

As a result of last season’s Week 5 32-23 victory over the Colts at FirstEnergy Stadium, the Browns now lead the all-time series 18-17-0. Before last season’s victory, Indianapolis had won three straights games against Cleveland. This includes two victories at Lucas Oil Stadium in Indy back in 2012 (17-13) and 2017 (31-28).

There is a secondary connection between these two teams which prevented the Browns from getting into the playoffs. Back in 2007, the Browns finished the season at 11-5 after beating the San Francisco 49ers 20-7. Since the game was in Cleveland, everyone was rooting for the Browns, however; there was a small section of FirstEnergy Stadium rooting for the Indianapolis Colts. That’s because the Colts would be hosting the Tennessee Titans on Sunday Night Football. Had the Colts defeated the Titans, then the Browns would get into the playoffs. Unfortunately, this did not happen as the Titans defeated the Colts 16-10, thus eliminating the Browns. By the way, the Titans would lose in the wildcard round against the San Diego Chargers 17-6 in San Diego.

Being at the stadium for the game last season, there was a sense of animosity between the two teams. In fact, the last few times that the Browns and Colts have met on the gridiron, there was a sense of animosity. If the two teams were to meet each other twice (one game in each other’s stadium) in a season, the animosity would only grow and perhaps it would become a full-fledged rivalry. Thus, the Indianapolis Colts should be moved out of the AFC South and come to the AFC North.