The Browns’ recent trade of their 2022 thru 2024 first-round selections in the NFL draft (along with a third and two fourth rounders, getting a sixth rounder back) was obviously the biggest movement of draft capital in a trade the franchise has ever made.

It made me wonder how unusual it was for the Browns to move first-round draft choices.

Turns out, it’s actually quite common. By my unofficial count, once the 2024 draft is complete, that will be the 30th draft in which the Browns have moved first-round picks. That seems like a lot.

Compared to the Steelers, for example, it sure is. Pittsburgh had a stretch from 1958-67 where they traded away their first-rounder six times. Not coincidentally, they floundered. When they stopped doing that, they drafted a bunch of Hall of Famers and, well, you know how that played out. Since 1967, there have only been six drafts in which the Steelers had movement in the first round.

That’s not to say the Browns did not make some good trades involving first-rounders. Here are a few of the most notable ones, both good and bad: 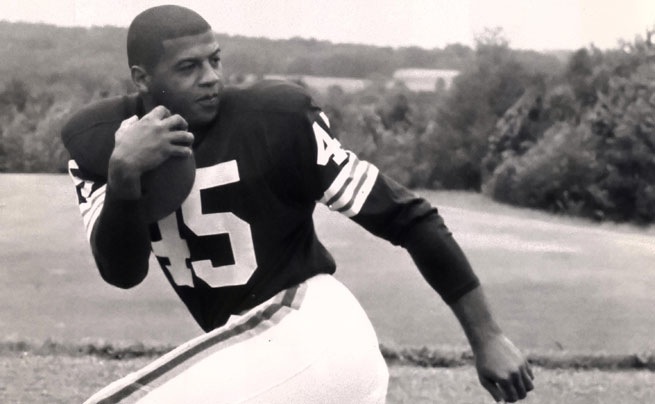 Perhaps the most notable trade the team made was in December 1961 (the draft took place before the NFL season was even complete back in those days). The Browns traded halfback Bobby Mitchell and the rights to their first-round choice, Western Illinois RB Leroy Jackson, to the Washington Redskins in exchange for the rights to Syracuse RB and Heisman Trophy winner Ernie Davis.

Many of you know the tragic story of Ernie Davis (captured in the movie “The Express”). He was diagnosed with leukemia, never played a down for the Browns, and passed away on May 18, 1963.

This was also apparently the last straw for Art Modell in his growing discomfort with head coach and general manager Paul Brown. Stories have it that Modell did not find out about the trade until he received a call from Redskins owner George Preston Marshall, who berated Modell for allowing the trade to happen without his knowledge. Within a few weeks, Modell had done the unthinkable and fired Brown.

Even if Davis had not developed leukemia, Brown had traded a player who was complementary to Cleveland star RB Jim Brown, while Davis was much closer to a replica-something that likely would not have sat well with Brown. Mitchell went on to enjoy a Hall of Fame career with the Redskins. He was the first African American to ever play for the team and eventually became the first African American front office executive in the NFL.

Grade-D, would be an F if the Browns hadn’t won the NFL Championship in 1964 and many players say they would not have won it without the coaching change. 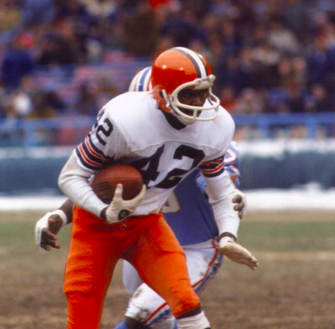 Heading into the 1970 draft, the Browns knew they needed a quarterback to take over the starting job from veteran Bill Nelsen, whose knees already had very high mileage and could give out on him with little or no warning. Complicating matters was the fact that the NFL was not exactly deep in QB talent at that time and the 1970 draft was practically barren. The Steelers won a coin toss with the Chicago Bears, who also needed a QB, for the first pick. Pittsburgh selected Terry Bradshaw and you know how that played out. The Bears thought so little of the rest of the college QB crop that they traded the #2 pick, leaving Miami sitting at #3. The Dolphins had a young and still developing Bob Griese, so they were open to moving that pick.

The Dolphins front office made two great moves that off-season. The second one was hiring Don Shula and you know how that played out. The first one, though, was holding out for either star RB Leroy Kelly or star WR Paul Warfield from the Browns in exchange for that #3 pick. The Browns gave in by trading Warfield and drafted QB Mike Phipps, who had ironically followed Griese at Purdue.

Nelsen’s knees held up two more years, but Phipps was forced to ascend to the starting role in 1972 despite only completing 27.7% of his 47 passes the prior year. That is not a typo-27.7%. Phipps was at the helm of a very conservative offensive attack that was good enough to win the Central Division in 1972 at 10-4-0 and scare the bejesus out of the Dolphins in the divisional round of the playoffs in what would become Miami Perfect Season.

Phipps never developed into a very good QB, finishing his career with the Browns and Bears totaling 55 touchdown passes and 108 interceptions. Cleveland had taken a 13th-round flier on a QB from San Diego State, Brian Sipe, who replaced Phipps as the full-time starter in 1976.

Paul Warfield, although criminally underutilized by the Dolphins, was still elected to the Hall of Fame and earned two Super Bowl rings. He played his final two seasons back in Cleveland.

Grade-D, would be a D- or F if not for this quirk; Phipps was part of a multi-team trade that landed the Browns at #23 in the first round of the 1978 draft where they selected Alabama TE Ozzie Newsome, a future Hall of Famer and team executive.  Eight years, though, was a long time to wait for a good return on Paul Warfield. 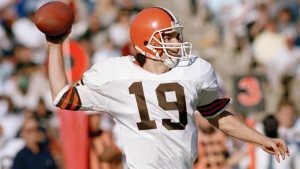 Bernie Kosar was an unusual NFL QB prospect, so it was appropriate he came into the NFL by unusual means. There is still a vehicle in place called the Supplemental Draft. This is usually for special cases where college players have lost eligibility and who petition the NFL to be included in a special, supplemental draft.

What made Kosar so unusual is that not only did he want to play in Cleveland; he worked to play the system to position himself to do so. In the spring of 1985, Kosar was still in his sophomore year at the University of Miami, a year away from draft eligibility, but he arranged an expedited academic plan that allowed him to graduate that summer and meet eligibility requirements for the draft.

The Vikings had swung a trade with the Houston Oilers (now Tennessee Titans for you young’uns) to move into the second spot in the supplemental draft behind Buffalo, which had just acquired QB Jim Kelly. Signing Kelly made the Bills open to overtures from the Browns, who gave up their first and third-round picks in 1985 and their first and sixth rounders in 1986 to move into position to draft Kosar.

After much hue and cry about the process and threats of lawsuits, the Vikings traded back down and selected future Hall of Fame DE Chris Doleman in the regular draft, not a bad consolation prize. The two players chosen with the first-round picks the Browns gave up, offensive linemen Ken Ruettgers and Will Wolford, had very good careers but not ones that would make anyone regret the Kosar trade.

Grade-A-, would be an A if Kosar’s body had held up longer and he had enjoyed more productive seasons with the Browns. The juice his arrival brought along with his QB skill led the Browns to their best era since the 1960s. Kosar remains one of the most beloved athletes in Cleveland sports.

The Browns’ have been more conservative with their first-round picks in recent years. The only other trade they made with one since 2009 was using their 2019 1st and 3rd rounders plus SS Jabrill Peppers for WR Odell Beckham Jr. That one should have worked.

Time will tell if their latest first-round trade will work. With so much on the line, it seems that this trade will be a turning point for the franchise, with the direction yet to be determined.

CLICK HERE! EVERYTHING YOU NEED TO KNOW ABOUT DENZEL WARD SIGNING!!!