The Cleveland Browns just signed DE Jadeveon Clowney to a one-year contract worth 11 million dollars! This was an exciting move because Clowney will be back with star DE Myles Garrett on the Browns’ roster for this upcoming season.

Anyway, this is just a simple move to bring back a solid player, right? Clowney had nine sacks, two forced fumbles and 37 total tackles in 14 games played last season for the Browns. Clowney has played for the Texans, Titans and Browns in seven previous seasons.

Well, this is where the move gets interesting and it has to do with starting quarterback Deshaun Watson and the potential of a suspension coming his way before the season starts.

By signing Clowney, the Browns are clearly playing in win-now mode. Doesn’t that mean the team feels Watson would be playing for the entire upcoming season? Not Baker Mayfield starting or a backup for say eight games or some assigned amount if Watson gets suspended.

Now, this could be overthinking a signing. The team may just want Clowney on the team because, as said, he’s a solid player. 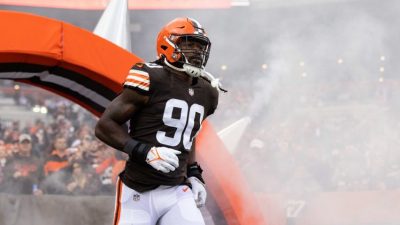 It will be interesting to see how this Watson ordeal unfolds. It never seems to end, really. Watson is meeting with NFL officials and everyone would like for the league to make a decision and either suspend the quarterback or not so the team can prepare for the upcoming season knowing how many games Watson will be gone for…

Or maybe they already do have an idea and aren’t afraid to sign a player for a chunk of cash in Clowney? Hmmm…

Well, regardless of quarterback news, teams should fear the duo of Garrett and Clowney for this upcoming season on the Browns. We’re talking a combined 25 sacks for the 2021 season by the two of them.

Welcome back to Cleveland, Jadeveon. Regardless of politics or conspiracy theories, we can’t wait to see the sacks this year.