At all levels of football, defenses are taught two major keys: win the turnover battle and stop the run. There is nothing that crushes the spirit of an opposing offense more so than being dominated at the line of scrimmage and losing control of the football. The Browns are no exception as these factors have played a crucial role in the team’s success through the first three quarters of the year. Throughout the 2020 season, the Browns defense has dominated the turnover margin, being plus seven in the category. Thus far, the Browns have only lost the turnover battle four times, including all three of their losses.

As for stopping the run, the Browns had similar success. They held opponents’ primary rushers to below 100 yards in all but three games, two of which were losses. Last week, the defense held Titans RB Derrick Henry to just 60 yards on 15 carries. Henry is currently the NFL’s leading rusher with 1317 yards on the ground. The Browns defensive line has been especially effective in stopping the run with defensive tackles Sheldon Richardson and Larry Ogunjobi being a force to be reckoned with in the middle of the field. DE Myles Garrett is known for his dominance in pass-rushing, but his ability to contain the edge on run plays should not be overlooked. The Browns’ linebackers, despite being inconsistent, have stepped up in the run game recently, with B.J. Goodson, Mack Wilson, Malcolm Smith and Sione Takitaki combining for over 20 total tackles against the Titans last week.

Going into this week’s matchup against Baltimore on Monday Night Football, stopping the run once again will be the single most important key to victory. Except, for this game, it’s not the running back the Browns hope to contain; it’s quarterback Lamar Jackson. 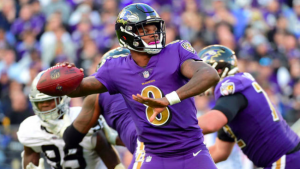 Jackson is the Ravens’ leading rusher this season with 669 yards and four touchdowns on the ground. It’s his elusiveness and speed that has enabled him to torment opposing defenses much more than his ability to throw the ball. Jackson’s passing stats are decent with just over 2000 yards and 17 TDs compared to seven interceptions. If the Browns are to contain the Ravens offense, they must take Jackson’s legs out of the equation and force him to make throws from the pocket. As a pocket passer, Jackson tends to struggle with poor throwing mechanics, throwing off of his back foot and sailing the ball over the heads of open receivers.

The Ravens’ passing game is built upon Lamar Jackson’s mobility, heavily relying on his running ability to open up the passing game. Forcing them to be one-dimensional is the only way teams have been able to contain Jackson and the Ravens since he has been in the league and is exactly what the Browns did in Week Four of the 2019 season, where Lamar Jackson threw two interceptions and the Browns won, 40-25. Last week, Cleveland’s defense showed that they are more than capable of containing opponents’ star players. If they can carry that momentum into Monday night against Lamar Jackson and the Ravens as well as continuing their dominance in the turnover margin, the Browns should have no problem getting their revenge against a team that embarrassed them Week One and taking one step closer to clinching an ever-coveted playoff birth.

(All stats from ESPN)