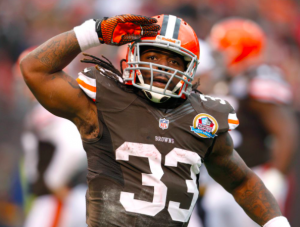 Drafted in 2012 at pick #3 Richardson, who played at Alabama in college, was the highest taken running back at the time since Reggie Bush in 2006. The Browns moved up to draft him at #3. What a dud. From the moment he put on his Browns jersey, he completely lost his value. He had his moments in his rookie season, scoring 11 touchdowns and reaching over 900 yards rushing. But by the following season, he was traded after two weeks into the season to the Indianapolis Colts. With Indy, he continued to struggle and was out of the league by 2014.