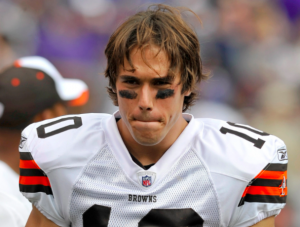 Drafted at #22 in the first round of the 2007 NFL Draft, Brady Quinn was billed as the next Bernie Kosar and would bring the Browns back to relevance.  I was so convinced this was going to happen back then that I bought a Quinn football jersey. That was a bad idea, though I still occasionally wear that jersey today. Quinn was never able to overcome the competition within the Browns quarterback’s carousel and injuries. He ended up going 3-9 in his Browns career and was traded after three seasons to the Denver Broncos. He never played a down in Denver and was out of the league by 2012.