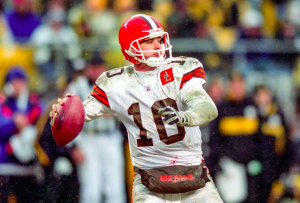 Kelly Holcomb came to the Browns from the Indianapolis Colts and was generally the backup quarterback to then Browns quarterback Tim Couch. In 2002, Holcomb got his chance to start a few games because of injuries to Couch and Holcomb made the most of his opportunity. He helped the Browns reach the playoffs and have one of the most memorable playoff games in Browns’ history. He threw for 429 yards and three touchdowns in what should have been a Browns playoff win against the Pittsburgh Steelers, instead, they lost the game late, 36-33, as then Browns wide receiver Dennis Northcutt dropped a first down catch that would have iced the game for the Browns. The following season Holcomb continued to start games but never won much, but for that brief time in Browns’ history, he was a huge boom for the team.