The 4th of July weekend is filled with fireworks, fun, family and barbeques. For our Cleveland Browns, this upcoming season should be filled with lots of fireworks. But it hasn’t been that far off in the distant past that Browns fans didn’t have fireworks to look forward to, rather though a bunch of misfires and duds. So I thought it would be fun to reflect on some of our most memorable booms or busts of Browns players in the last 20 years.

I won’t be including any of the big and rising booms with recent players like Baker Mayfield, Nick Chubb or Myles Garrett or recent duds like Corey Coleman. So let’s have some fun with a time to reflect and remind ourselves that the Browns are good again and thank goodness we don’t have to watch those duds that fizzled out quickly on their way down through the dark sky. 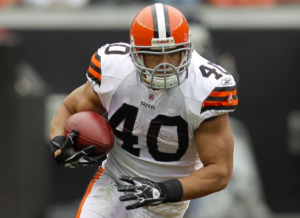 For one season, Peyton Hillis was one of the best running backs in the NFL. He finished the 2010 season with nearly 1200 rushing yards and 11 touchdowns. He was rumbling and tumbling downfield, leaping over his competition and winning the hearts of Browns fans. He made the cover of the Madden Football Game the following season and his career went south, but for one season he was on top of the world and a huge success.