We’ve been there before, many times, each spring in late April or early May, getting ready to watch the NFL Draft and our beloved Cleveland Browns getting ready to draft a high pick, usually anywhere from #1 to #10. The gatherings, parties and celebrations around this annual sacred event have made Browns fans around the world pretty much paralyzed to the idea that this was just par for the course and would continue into infinity!

Is the sunshine beaming through those windows today, Browns fans? Because today, our Browns are on top of the world. No longer are the Browns taking another #4 or #5 draft pick. No, they have the #26 pick! And with that pick, I’d venture to suggest the Browns might even move out of that pick and potentially try and collect more picks.

The Browns did very well in securing several free agents in recent weeks, including John Johnson, Takk Mckinley, Malik Jackson and Anthony Walker. With these skilled veterans coming over to Cleveland, this will give the Browns front office and their coaching staff even more freedom to zone in on players that complement their new winning formula. And Browns fans are rejoicing but still can’t quite believe it.

So here are a few players I believe the Browns have on their radar, especially in the early rounds of the draft: 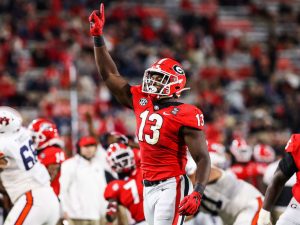 The 6-3 linebacker and edge pass rusher from Georgia has great length and speed. With 9.5 sacks this past season has a knack for getting to the edges quickly, explosive off the snap. He’s a raw talent. Will he be there at #26? The Browns did attend The Georgia Bulldogs Pro Day, so we’ll see what happens on draft night!