I’m just waiting to wake up from this dream.

Sure, I thought the Browns certainly had a chance to beat the Steelers in their playoff bout. Never did I expect the Browns to come out with such absolute domination over a team that has destroyed Cleveland for my entire life. I thought it would be a close game, a back-and-forth affair. It wasn’t and that’s a good thing!

Frankly, this was more than just a win for the City of Cleveland.

It is a representation of the fight that these people have within. The love and loyalty for their teams no matter how good or bad they are each year. Certainly, there have been many seasons that were absolutely painful to watch. However, Browns fans stayed loyal to the team that matters most and it finally paid off with the 48-37 playoff win over those daunted Steelers.

The best part about this whole thing?

Besides the obvious in the opportunity to face off against the Kansas City Chiefs in the next round of the playoffs.

The best part is that this is here to stay. With head coach Kevin Stefanski and his philosophy, Baker Mayfield leading the charge as the quarterback, Nick Chubb, Kareem Hunt, OBJ and Jarvis. Plus, the opportunity to improve the team even more for next season. 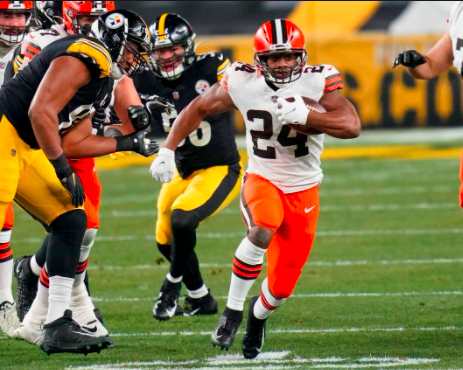 It’s only the beginning of what could be described as a dynasty being born. Sure, the team has won only a single playoff game and has no Super Bowl rings to showoff. But frankly, it wasn’t just the Browns winning, but the Steelers losing. It just shows how the tables are turning and finally, it is CLEVELAND’S time to command the AFC North and make this franchise known for its winning again, turning the page from being the laughingstock of the league these past few decades.

What Mayfield and company did on Sunday night destroyed some demons. Monsters that plagued players, coaches and fans alike. Those two aforementioned droughts are done. Gone. Finished.

Say the Browns go into KC and get destroyed by a score of 35-0. Of course, it would be extremely disappointing and no, that is not my prediction for the game. My last point in this article is regardless of what happens for the rest of these playoffs, it’s only the beginning. We, as a fan base, have so much to look forward to this next decade.

Can one ask for a Super Bowl or two? Well, it’s no longer the “same old Browns.” Why not!?

I joked that my puppy Bella is going to think that the Browns making the playoffs and winning in them is a completely normal occurrence that happens every single year. Well, let’s hope from this year forward that is the case.