2020 treated the Browns very well. Quarterback Baker Mayfield proved that he is truly the right guy to lead this franchise. The team finished 11-5, snapped an almost two-decades-long playoff drought and even beat the Steelers in Pittsburgh for the first time since 2003 in the wild card round of the postseason. The week after the victory in Pittsburgh this Browns team stood toe to toe with the defending champion Kansas City Chiefs and came just a couple of plays away from potentially winning.

Now that the success and excitement of the playoff run is over, the Browns must address the elephant in the room. 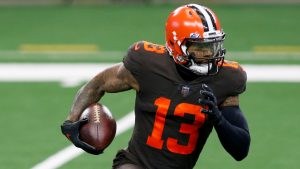 Ever since Beckham’s arrival before the 2019 season, he has never seemed to mesh with Baker Mayfield or the offense. Fans can of course recall the struggles that Odell, Baker and the entire offense had under former head coach Freddie Kitchens in 2019. However, the connection between Beckham and Mayfield didn’t look much better this season prior to Beckham’s torn ACL. In six games this season ( I won’t include the 7th game in Cincinnati because he got hurt so early), Beckham caught 23 passes for 319 yards and three touchdowns. That is rather underwhelming. He was on pace for 61 receptions, 850 yards, and eight touchdowns.

Aside from underwhelming production from Beckham, the biggest concern was how much better Baker Mayfield looked after Beckham was out with a torn ACL. Even that same game Baker seemed to flip a switch. In the Week 7 game at Cincinnati, Baker Mayfield started 0/5 and threw a truly awful interception when targeting Beckham in the first quarter. That interception was the same play Beckham tore his ACL. After this, Mayfield finished the game 22/23 for 297 yards and five touchdowns. His one incompletion in this stretch was a spike. This better play from Mayfield without Beckham didn’t stop in Week 7. Mayfield’s stats from Week 1-6 were 1,095 yards, 10 TDs and six INTs. Mayfield’s stats from Weeks 7-16 (not including the INT when Beckham got hurt in Week 7), were 2,468 yards, 16 TDs, and just two INTs. These stats don’t include two very good playoff games in which he threw four TDs to just one INT and it’s worth considering that the weather conditions in Cleveland were awful in Weeks 8 and 10 which inhibited passing.

The numbers clearly show that Baker started to flourish when OBJ went out. However, this could be due to more time to grow within head coach Kevin Stefanksi’s offense and there’s a chance that Baker and Odell could grow together in this offense and make this work. GM Andrew Berry and Stefanski seem confident that the two stars can find mutual success with one another.

However, in my opinion, Baker has proven in college, his rookie year and this past season that he plays his best football when he spreads the ball around and doesn’t make an effort to feed one receiver. Also, it’s worth considering that Odell and fellow receiver Jarvis Landry each command large salaries at a position that is fairly easy to draft and replace. Beckham could be traded for an asset and/or cap relief. The Browns clearly have no shortage of needs, especially on defense and have to extend young players like Baker, CB Denzel Ward and LG Wyatt Teller soon.