For almost any other team, during any period, in the long history of Major League Baseball, trading away three top of the rotation-caliber pitchers in less than 14 months would herald the beginning of a long, tough rebuilding project.

But, not the Indians.

The front office in Cleveland has, instead, pioneered a paradigm shift whereby a wholesale rebuild is no longer a depressing inevitability. Even when free agency looms for core, young talent.

Fans of franchises outside of huge markets, such as New York and LA, are familiar with the all-too-common reality of ‘rebuilding mode.’ An aging roster or financial constraints affecting a GM’s ability to sign outside talent, or retain his own, necessitates a firesale of the organization’s best assets before they can leave via free agency without the team receiving much in the way of compensation.

In exchange for such highly-coveted players, a sizeable haul of top and mid-level prospects is neatly deposited into the team’s farm system. The strategy relies on excellent scouting and the minor league system creating the optimum environment to develop talented youngsters and realize their full potential. The expectation is that, after three or four years of mediocrity and 90-100+ loss seasons, the big league club returns to a level of competitiveness. Fans then enjoy several playoff runs to help erase the memories of perennial basement-dwelling, before the whole process is repeated again within a decade.

However, the Cleveland Indians look to have bucked this trend. And nowhere is it more evident than in their pitching staff which has been the cornerstone of their recent successes. 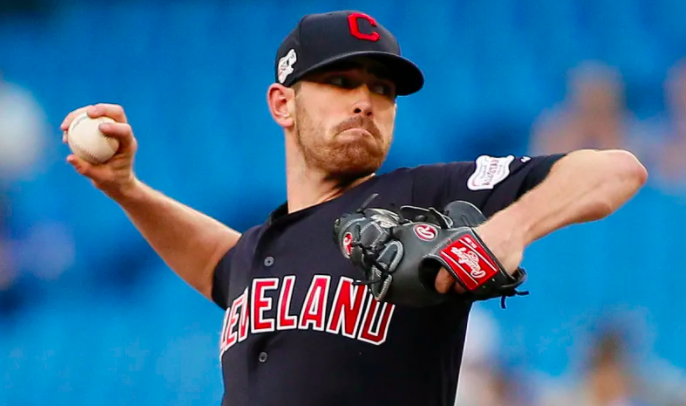 During the 2019 season, after a bizarre meltdown on the mound that embarrassed both his manager and the team, Trevor Bauer was jettisoned from the Indians ball club and sent to Cincinnati, via trade, on July, 31. This was just over half a season after finishing 2018 sixth in Cy Young voting and earning his first MLB All-Star Game berth. Following the conclusion of the same 2019 season, the team then traded away two-time Cy Young winner and long-time fan favorite, Corey Kluber. This due, in large part, to injury concerns (which have since been vindicated). The former Indians ace was still just 33, had finished third in Cy Young voting the previous year and was just two years removed from his 18-win, Cy Young Award-capturing performance in 2017. Then, just recently, Mike Clevinger became the third casualty from last year’s rotation. He was unloaded for a big haul of young talent after he broke COVID safety protocols and lied about it to the dismay of his coaches and teammates. Clevinger, like Bauer, was a very highly-regarded front of the rotation starter who had already compiled a career 3.20 ERA in 523 innings with the Indians.

For any other franchise, this trio of transactions would have been viewed by fans and sports media alike, as reckless self-harm for a team that is still well inside a current window of playoff contention. After all, Cleveland won 93 games last season and was 21-13 at the time of the Clevinger trade.

More than a week has passed since the trade.

The sky is not falling; far from it.

In fact, the team now has a better winning percentage (25-16 record) and is tied for first place in what has emerged as the most competitive division in all of baseball. That record also betters the mark the Indians were at following the first 41 games of the 2019 season (when all three hurlers were still on the roster). Last year, they began the season just three games over .500  at 22-19.

So how have the Indians accomplished such a spectacular feat?

To be in a better position than they were last season?

A position that sees their pitching statistically better in 2020 despite having subtracted three-fifths of its 2019 starting rotation. Not to mention all three of those castoffs being Cy Young-calibre pitchers.

Well, the story begins in Secaucus, New Jersey, taking place between June 9 and 11. This being the location and date of the 2016 MLB Draft. And the explanation starts to take shape in the third round. This is when the Indians selected Aaron Civale. One round later, Shane Bieber, the Indians’ current ace, fell into their lap. The front office would complete the assembly of its stellar, present-day triumvirate in the 12th round when they used this pick on Zach Plesac.

As most will surmise from their draft slots, none of them were particularly highly-regarded across Major League Baseball ahead of the draft. Bieber was a walk-on at UC Santa Barbara & Plesac underwent Tommy John’s surgery while in college, which resulted in his velocity dropping to 87-90 MPH. All three signed for a combined value of less than $1.2M. But yet they headline the league’s best pitching staff and are the major reason why the Indians find themselves in first place.

Shane Bieber leads all qualified pitchers in almost every meaning statistical category; Civale has a 2.95 ERA over 109 total Major League innings to start his career and Zach Plesac is fresh off seven innings of one-hit ball in a season where he has compiled a 0.73 WHIP and an absurd 17 K per BB ratio. Furthermore, the fact they are all under 26 years old and under team control until at least 2025, is a reason why the Indians have also seen their window to compete widen, not shrink despite the trades.

This delivery of stellar homegrown talent through the draft has given the organization the new-found confidence to pull the trigger on deals that most teams would steer clear away from – either due to fear of a knock-on effect to its team’s ability to compete, or the wrath of its fan base. Cleveland’s willingness to execute these types of deals, but also be bold enough to unload young stars who are under team control for many more years, demonstrates a strong belief in the system of scouting and development they have built over many years. As well as a desire to keep the franchise on a stable path to compete year on year.

A large part of the kudos has to go to Brad Grant – Cleveland’s VP of Baseball Operations – and his scouting department. Grant and his team have reinvigorated the organization’s amateur draft since the late 2000s and the results have been spectacular. To find such gems in the deeper reaches of a single draft class, like that of 2016, is a stunning achievement and testament to their skill as talent evaluators. The recent emergence of Triston McKenzie – a first-round pick from 2015 – as part of baseball’s best rotation in 2020, further strengthens Grant’s reputation as one of the most talented executives in the sport. But he is just one of the many revered executives transforming the much-praised and envied Indians Front Office.

The top brass acknowledged the financial restraints which have precluded the team from signing other franchise’s tops talent when they hit the market and, on occasion, from even retaining their own (see: Michael Brantley, Francisco Lindor). As a consequence, the front office has had to adapt its approach. The GM’s office has now become synonymous with shrewd deals. Whether it be collecting an impressive haul of talent for one of their aging or misbehaving, stars (see: Bauer, Clevinger, or making astute, low-risk signings of players who possess the intangibles and enough under-the-radar talents to get the job done (see: Cesar Hernandez, Oliver Perez). Couple a predilection for clever transactions at the MLB level with a well-oiled scouting and development machine and its clear the Indians have found a formula to break the tired boom and bust cycle for low and mid-level market franchises.

The Indians organization is in the business of reloading not rebuild. It is a recipe that has seen the team avoid the sour taste of a losing season since 2012. It is one that will help the team continue the competitive streak in the long term and eventually break a 72-year curse.