With the Cleveland Browns set to return to New Jersey on Sunday to face the New York Jets in a game, the Browns are hoping to lock up a playoff spot for the first time since 2002. Playing the Jets always brings back that memory of the double-overtime thriller the Browns won against them during the 1986 season playoffs.

I was a junior in high school that year and it’s my favorite Browns memory. There have been numerous other memories before and since then with the Browns, but this game was one of the few the Browns won. To understand the significance of the victory you need to look back at that time in Browns’ history. I find when I reflect on those early Browns teams, led by quarterback Bernie Kosar, that they are strikingly similar to what we are looking at with this current Browns team led by quarterback Baker Mayfield.

Kosar was in his second season as the Browns QB in 1986. The Browns made the playoffs in 1985, but Kosar was injured on and off that season and the Browns lost in the first round of the playoffs to the Miami Dolphins. The Browns actually hadn’t won a playoff game since 1969. So, after the Browns finished the 1986 season at 12-4 under young coach Marty Schottenheimer, in his 3rd season, the anticipation for the divisional playoff game in Cleveland was off the charts crazy.

I got to go to the game and that added to my excitement and build-up to the game. Back then to get a ticket you had to drive to the old Municipal Stadium and stand in line hours before the ticket window opened that Monday after the season ended. When you had the actual ticket in hand it was a thrill indeed!

I went back recently and watched the game again on the old NBC broadcast. It was really interesting watching that broadcast and also thinking back to being there in person and just how much of a roller coaster that game was for both teams. The fact that the Browns won the game was remarkable considering what happened over the course of the game.

I always have this image of Kosar being brilliant with his abilities as a Browns quarterback legend that so many of us Browns fans still hold onto today. But when you start looking back at that Jets game, in particular, you can see how often Kosar made mistakes as a young quarterback and really could have cost the Browns that eventual playoff win. But the Browns defense that game was great, sacking the Jets quarterback nine times and forcing the Jets to punt the ball 14 times! Wow!

The Jets led the game, for much of it, relying on running back Freeman McNeil, who toward the end of regulation scored from 25 yards out on an impressive effort that extended the lead in regulation to 20-10 with just four minutes left. The touchdown run came right after a Kosar interception.

When the Browns were down 13-10 earlier, with just about 10 minutes left, Kosar also threw an inexcusable interception into the endzone from just three yards out. Kosar threw the ball 64 times in the game. Yes, 64! Really! And only completed 33 of them. So the mistakes were real. And that too is what makes the eventual win even more stunning.

The other player that actually won the game for the Browns but had a roller-coaster afternoon was the old veteran kicker Mark Moseley. The former Washington Redskins star kicker was from the old school of kicking where he kicked from straight on. During the game, Moseley made some kicks and missed some. It was the one he missed in the first overtime that would have been the talk of the town for years to come if the Browns hadn’t won the game.

After the Jets took the seemingly insurmountable 20-10 lead with four minutes left, the Browns offense and Kosar’s heroic abilities and accuracy finally took shape. The Browns finally moved the ball down the field quickly and scored on Browns running back Kevin Mack’s one-yard scamper. The Browns defense again stepped up and forced the Jets to punt it to Cleveland with just under a minute left. Kosar connected with Browns receiver Webster Slaughter down the sideline at the five yard line. At the time, the fans in the stadium and the Browns players all started celebrating like they’d won. The Browns wasted several seconds in the bedlam, but when Kosar tried darting the ball to Slaughter in the endzone to win it with 11 seconds to go, the pass was nearly picked off again by the Jets. The Browns then elected to kick the game-tying field goal with Moseley, who was good with the kick. The party at the stadium was starting, but there was still overtime.

The Browns had all the momentum, though. After the Jets received the kickoff in overtime, the stellar Browns defense stopped the Jets offense again and forced another punt. The Browns and Kosar continued their impressive run. After Kosar completed a beautiful pass to Browns wide receiver Reggie Langhorne down to the six yard line, it seemed like a lock that the Browns were going to win and prepare to face the Denver Broncos in the AFC Championship Game. The Browns brought out Moseley to kick the winning 23-yarder, but Moseley, who’d missed a few other kicks earlier in the day, missed this chip-shot. The celebration went silent and you had Browns fans recalling the horrors of Browns’ past playoff failures. 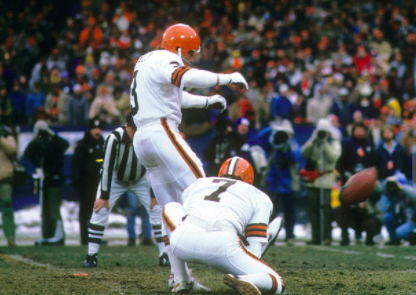 And the Browns defense knew that and forced the Jets to punt away the ball again. As the Browns got the ball back late in the first overtime, coach Schottenheimer went to the run game again and running back Kevin Mack. As the game went into the 2nd overtime, Mack rumbled forward on a nice 15-yard play which took the Browns down to the nine yard line. With the stadium back into a frenzy, Moseley came back out to try and give the Browns their first playoff win in almost 20 years, and he did, and the Browns’ celebration was finally complete.

I’ll never forget hugging complete strangers at that moment. The relief and excitement were overwhelming! The roller coaster had come to a stop on this Sunday. A memory of a lifetime!

I see these current Browns, including quarterback Mayfield and coach Kevin Stefanski, in a lot of ways are like those old teams of Kosar and coach Schottenheimer. The thrill of victory and the agony of defeat is always so close in mind, but what those Browns did in the past and these Browns are doing now make those moments much more memorable.

Whatever happens on this upcoming Browns and Jets game, try to enjoy the ride!