The Cleveland Cavaliers are off to a 2-1 start to the 2022-23 NBA season. They lost a close matchup to the Toronto Raptors and won both games of a back-to-back against the Chicago Bulls and the Washington Wizards. All-Star point guard Darius Garland suffered an eyelid laceration in the opening game of the season and has missed two games. He will likely be out at least one more game. Despite losing Garland, the Cavs have looked fantastic. Donovan Mitchell has been everything we fans could have hoped for. But, the biggest question coming into the season for the Cavs was figuring out the wing depth. After trading away Lauri Markkanen, the Cavs had a big hole to fill at the three spot. Let’s take a look at the SF position through three games. Caris LeVert earned the starting SF position after a training camp/preseason battle with the others on this list. He looks to be the best combination of offense and defense that the Cavs roster has in its wing players. Caris has also been able to fill a void as a playmaker since Garland went down. LeVert is averaging a career-best 6.3 assists so far this young season. I expect LeVert to continue to be in the starting lineup as the season goes on. He seems to be the best option (and a good one at that) for Cleveland. 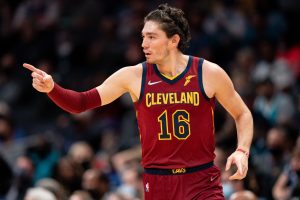 Cedi Osman is a name that came up all summer in trade talks. For now, it looks like a good thing that none of those trades came to fruition. Cedi has been brilliant off the bench for the Cavs in these three games. He is shooting the lights out and making some big plays. He seems to have great chemistry with Donovan Mitchell, which will be something to watch as the season progresses. Osman is shooting 56.7% from the field and 57.1% from three. Those blistering shooting clips have given him a big leg up on some of the other wings on the roster. 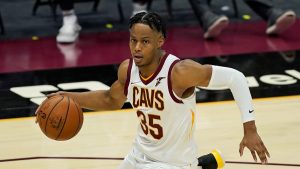 Isaac Okoro is someone who came in as one of the favorites to land that coveted starting SF spot. However, he lost the preseason competition to LeVert and has not shown much to prove that the coaching staff made a mistake in the decision. Okoro has been historically bad to start the 2022 season. In almost 20 minutes a game, Okoro is averaging only 1.3 pts, 1.0 reb. and has yet to make a three-pointer or record an assist. Isaac still has plenty of time to ‘right the ship’, but this slow start certainly isn’t helping his case. 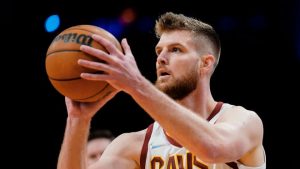 Dean Wade has played pretty solid in his first three appearances. Wade isn’t considered a SF per-say, but he can play a similar role that Markkanen did for the Cavs last year as a Jumbo SF. He isn’t getting as many minutes as some of the others on this list, but that should change soon. He has shot well to start the year, much like Osman. Wade is shooting 72.7% from the field and 57.1% from three. If Dean can continue to shoot the rock as well as he has, he may move past Okoro in the rotation going forward. The idea of Dylan Windler has always been something the Cavs are sorely lacking. A true three and D wing. Windler, when healthy, can really shoot the lights out. However, he has never been able to stay healthy. Windler was reportedly in the mix for the starting SF spot and had a tremendous and healthy offseason. Right before the preseason games started, Dylan suffered an ankle injury and hasn’t played since. If he can ever stay healthy, I personally think he can be greatly beneficial for the Cavs. But, it will be hard to see him coming back from injury and taking away minutes from others who have already started so hot this season.