As we all await the second half of the MLB season, I was reminiscing about some of my past favorite Cleveland Indians. The Indians have been a pretty good baseball team for the past 25 years. Prior that that stretch they weren’t that great but still provided fans with moments and players that will be etched in our memory from when we were kids going to games at that cathedral of a stadium, Municipal Stadium.

So here my five most favorite Cleveland Indians:

Thornton played for the Indians from 1977-87. He was the guy the Indians hoped each season would provide the power and home runs the team was always seeking. Thornton was a good player in his day and hit 30 plus home runs for several years. When I first attended that ginormous Municipal Stadium, Thornton was one of the Indians’ best players. I don’t remember hearing him talk a lot as he was a kind of a quiet individual. But watching him hit home runs, being a young kid, was exciting to watch. 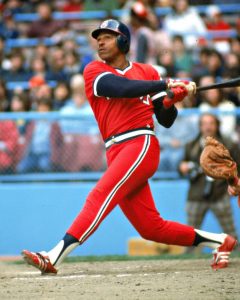 #RETWEET to thank @bakermayfield for his time spent in Cleveland with the Browns!!!

#RETWEET to thank @bakermayfield for his time spent in Cleveland with the Browns!!!