That’s right, folks! Football is back, which means that fantasy football is back, too! I am here to help (or try to help). There is a lot to unpack tonight from a fantasy perspective, even for players that may not have anyone playing. 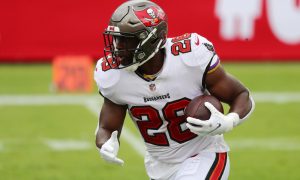 One of tonight’s biggest questions. Since Leonard Fournette has gotten to the Bucs, their backfield has been primarily a committee. Both himself and Ronald Jones have seen touches, however, a majority of those touches favored Jones at a split of 227-161. Fournette came in later in the Buc’s camp and it seemed as if they were trying to slowly integrate him into the system. That said, Jones was the spearhead of the backfield. Jones out-rushed his backfield counterpart by over 600 yards and was 22 yards shy of hitting the 1,000-yard benchmark. This is not a shock as the attempts were very much in Jones’ favor, but it did prove that Arians had a significant role for Jones out of the backfield.

But the postseason was a much different story.

Leonard Fournette put on a clinic in both the ground and passing game. Fournette rushed for 300 yards on 64 attempts and was targeted 21 times with 18 receptions out of the backfield for 148 yards. To put those numbers into context, Fournette’s receptions (18) not only led the Bucs backfield but also led all Bucs wide receivers. That’s right, Fournette outbid Evans and Godwin for receptions. To caveat that, he also had the third-most receiving yards, outranking tight end Rob Gronkowski, wide receiver Antonio Brown and rookie wide receiver Scotty Miller. Ronald Jones, on the other hand, was very uninvolved in the passing offense, with only two targets and zero receptions. It is not a secret that the Bucs will utilize Fournette more than they did in 2020, but how much more is a mystery. Fantasy owners need to pay close attention to the splits tonight to see if this will be more of a committee once again or if one of two will take over as the lead back.

Zeke Back to Form? 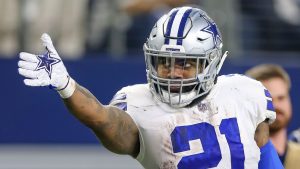 Frankly, this could be the biggest question mark going into this year for all of fantasy. Last year was a very mediocre year for Zeke. He was just shy of the 1,000-yard benchmark and was seemingly playing hobbled the entire year. However, this year’s Zeke already seems to be an upgrade from last year. Zeke came to camp visibly lighter. He dropped over 10 pounds and has impressed at camp. With Dak back in the fold, this gives defenses another element to plan for. Loading the box may be tricky with the number of weapons that a star quarterback Dak Prescott has on the outside. Now, the offensive line may not be as sturdy as when Zeke first came into the league, but as the Cowboys are getting healthy it is obvious how much pressure that will take off Zeke. With that, we can expect Zeke will have a much better fantasy year than last, but will he get back to the top-five back that we are used to? A lot of it, unfortunately, is going to be reliant on the health of his quarterback.

How Healthy is Dak? 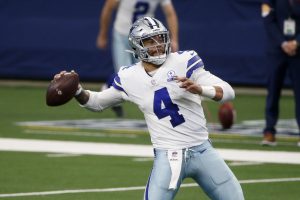 Before his tragic injury, Dak Prescott was on pace for a 5,000-yard passing season. This is an accomplishment that most NFL quarterbacks can only dream of. Unfortunately, Prescott’s injury cut his season short, but he is back and ready to go for the Cowboys tonight. There are questions about Prescott’s ankle, but more daunting is the shoulder strain he’s been dealing with. Prescott strained his shoulder in July and has missed all of the preseason. There have been many questions on his ability to throw being as it is his throwing shoulder that is injured. The headlines have been filled (as always) with the Cowboys and the status of their star quarterback. Reports stated that in early August Prescott had an MRI done on his shoulder that had fans scrambling. To add to the drama, the Cowboys were also the featured team this year on HBO’s hard knocks, which gave fans an inside look into all the controversy. This only brought more to attention the severeness of both of Dak’s injuries, the seemingly unsettled front office, and the coaching staff relationship. If Dak is healthy, he could put together a top fantasy year, but that is huge if as of now. We all saw what happened to Cam Newton after coming off of his shoulder injury. Let’s hope that Dak can be back to form for 2021. 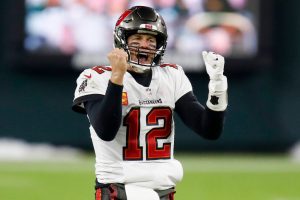 This is unlike any other year with Brady in terms of the targets at his disposal. He has more than enough mouths to feed on their offense, but he has yet to find his go-to guy that fantasy managers can rely on. Three things in life are certain death, taxes and Tom Brady will have a favorite target.

But who will it be?

With a full year with his receivers, tonight could be the emergence of Brady’s go-to guy and a potential fantasy superstar. For me, there are only three realistic options: Mike Evans, Chris Godwin and Antonio Brown. Gronkowski is well out of his prime and was very pedestrian last year, O.J. Howard is as injury-prone as they come and Scotty Miller is boom or bust. One thing is for sure, if there is a clear-cut favored target tonight, you’ll want to do everything in your power to snag him if you haven’t already. Brady spread the wealth pretty successfully last year, but early on the Bucs’ offense struggled to produce even with their talent. Down the stretch, it seemed as if the Bucs offense started to click once Brady found who he can trust in high pressured situations. I could see Brady developing a favorite target early, so make sure you are on top of the target share fantasy owners.

Those who have players going and those who do not should have close attention to this game. There are not many home openers like tonight where there are significant fantasy questions that need answering. take advantage of the information you get from the game tonight, it could be big in securing a W in your fantasy league.

Top 10 Players That Could Win Your Fantasy League This Year

The Mets and The “Thumbs Down Theory”